I have received a debt letter from HMRC – is it real?

You may have recently seen a picture circulating on social media that claims to be of a fake HMRC letter. The post states that the phone number provided is a premium rate number and that HMRC has confirmed that it is a scam. We have checked this directly with HMRC and it is not a scam – it is, in fact, an official HMRC letter, the contents of which should not be ignored.

There are so many scams going around online, whether via social media or email, that it is often difficult to separate fact from fiction. You may have seen numerous articles trying to help you identify scam (phishing) emails and phone calls, including our own: Received an automated message saying HMRC have taken out a warrant for your arrest? This is a scam. But what about those official looking brown envelopes that come through your letterbox? How can you tell if the letters inside are real and from HMRC?

The image below is from a recent Facebook post in which someone claims the ‘HMRC’ letter they received is a fake and that the phone number directs them to what looks like a premium rate phone line (the sensitive details have been blanked out). In the post, the person also said they confirmed that this wasn’t a genuine letter with HMRC themselves. Adding weight to this being a scam, is the fact that the letter is generically addressed – e.g. Dear Sir/Madam, rather than to a named person and was not listed at the time in HMRC’s ‘Genuine HMRC contact’ guidance. 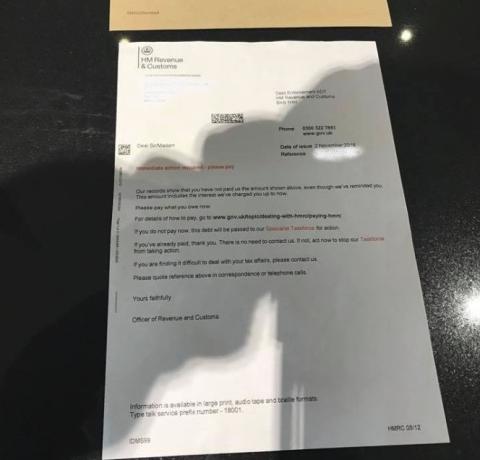 Despite everything above, is not a scam letter. It is a genuine letter from a little known department within HMRC called the Aged Debt Team. While it is always prudent to be cautious, in this case the letter received was real. Anyone who has received a letter should contact HMRC as soon as possible using the details on the letter.

We have fed back to HMRC about the issues that led people to believe this letter was a scam – and in particular that it was difficult to verify because neither the phone number nor address could be cross checked against any official Government website information that we could find.

We can confirm that HMRC have updated their ‘Genuine HMRC contact’ guidance with the following text, although the Aged Debt Team details and phone number still do not appear on GOV.UK.

If you want to verify the letter search for the telephone number given on the GOV.UK website. Should you require any more information speak to an advisor about the details in the letter to make sure it is genuine.

This advice applies to any correspondence from HMRC which you are unsure about.

More generally, here are some things to look out for to tell if an HMRC letter is real:

If you are unsure about any correspondence you have received purporting to be from HMRC, then you should contact them via their helplines to confirm.