HMRC have advised LITRG that they are reviewing the penalty position of taxpayers to whom they issued protective assessments in March 2021 relating to offshore tax liabilities. HMRC will discuss the position with the taxpayer first, before sending the taxpayer a penalty explanation letter. 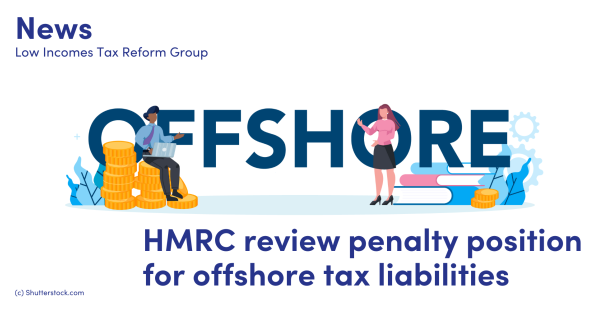 This activity will mostly affect taxpayers who have made a voluntary disclosure under the Worldwide Disclosure Facility (WDF) but who have not yet finalised that disclosure with HMRC.

HMRC issued ‘protective’ tax assessments to some taxpayers in March 2021, in cases where they would have run out of time to do so on 5 April 2021. This was so that HMRC could have a legal mechanism to collect the tax. There is more information in our news article from March 2021.

However, those assessments related solely to the tax and not to any associated penalties or interest. In relation to HMRC’s approach to finalising the penalty position, HMRC have provided us with the following statement:

The Worldwide Disclosure Facility is available for customers to make a voluntary disclosure to HMRC relating wholly or partly to an offshore issue. The process is intended to help customers bring their tax affairs up to date and, usually, cases are settled by way of a contract settlement, which is an efficient way of resolving matters.

Earlier this year HMRC made assessments in respect of offshore tax disclosed to them, following the introduction of the Requirement to Correct (RTC) legislation.

Where a settlement had not been agreed with HMRC we contacted customers and made an assessment to ensure it was within the time limit. This does not mean we will stop trying to resolve matters through a contract settlement where that is possible and the customer agrees.

Following the assessment of the tax HMRC will now be reviewing the related penalty position.

HMRC are now contacting customers and their agents to talk about the circumstances that led to their offshore income not being declared. HMRC want to give customers the opportunity to share their reasons and any mitigations so they can be carefully considered when assessing what penalty is owed. HMRC will send a letter to customers and their agents to prepare them that HMRC will be calling and will be happy to agree a convenient time for that more detailed conversation to take place.

Following that call customers will receive a penalty explanation letter, clearly setting out the penalty that will be charged – assuming HMRC conclude that is one due. Customers will then have an opportunity to tell HMRC about any further evidence impacting their penalty position, before a penalty assessment is raised 30 days later. This approach does not affect customers’ rights to appeal that penalty assessment, should they wish to do so.

If you are a customer who appealed the protective assessment and agreed with HMRC to settle your disclosure by contract settlement HMRC will already have discussed your penalty position and will not need to contact you again.

I have previously received a protective assessment from HMRC. What can I expect?

If you received a protective assessment in March 2021, as explained above you should note that this concerned the tax only. The penalties and interest are charged separately.

HMRC issue protective assessments where they ‘have been unable to reach an agreement with you covering the total amount due’ (including penalties and interest), and that assessment is for the tax which HMRC ‘think you owe’. You might have agreed with the amount of tax charged by the protective assessment, or you might not.

I agreed the amount of tax due to HMRC

If you agreed with the protective assessment and paid the tax (or had already paid it), HMRC should contact you now to discuss the penalty position. You should initially receive a letter from HMRC indicating that they intend to telephone you. They will then try to contact you by telephone to discuss the reasons why you did not declare your offshore income.

If HMRC phone you when it is not convenient, let them know, and you can agree a suitable time for the conversation to take place.

It is important to answer HMRC’s questions. If HMRC understand why you did not declare your offshore income, they might be able to reduce any penalty that might be due.

If you agree with the penalty assessment, you should pay it according to the terms on the assessment.

If you disagree with the penalty assessment, you should appeal it if you have grounds to do so. For example, you may consider that you had a reasonable excuse for the non-disclosure of the income. You normally have 30 days in which to appeal against a penalty assessment.

If you did not agree the amount of the protective assessment, you should have appealed it. If you appealed against the assessment and agreed with HMRC to settle your disclosure by contract settlement, you will have already discussed your penalty position with HMRC. HMRC should not need to contact you again.