The Chancellor set out the Autumn Budget and Spending Review with plans to ‘build back better’ over the rest of the Parliament. With public finances in a stronger position than expected, it focused on investing in public services, driving economic growth, leading the transition to net zero and supporting people and businesses. In this article, we summarise the tax and related announcements of most interest to those on low incomes. 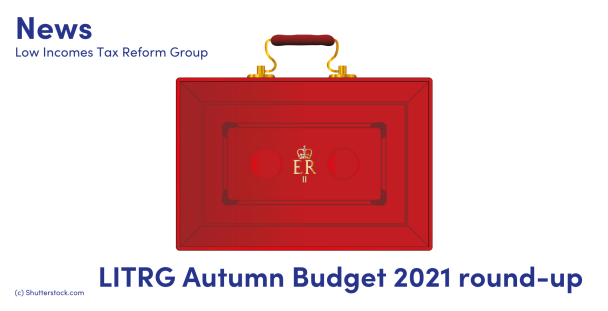 When the Government announced the new Health and Social Care Levy (see below), it also announced that the dividend rates would increase with effect from 2022/23. The rates will each increase by 1.25%.

The dividend ordinary rate (for dividends otherwise taxable at the basic rate) will be 8.75%, while the dividend upper and dividend additional rates will be 33.75% and 39.35% respectively.

The Chancellor confirmed that the thresholds for 2022/23 will rise in line with the September Consumer Prices Index (CPI) of 3.1%, bringing the Primary Threshold and Lower Profits Limit from £9,568 to £9,880. The Small Profits Threshold will increase from £6,515 to £6,725. This excludes the Upper Earnings Limit and Upper Profits limit – both were previously aligned to the income tax higher rate threshold (and therefore frozen at £50,270) for 2022/23 to 2025/26.

As previously announced, the Government has legislated for a new Health and Social Care Levy to fund the NHS and social care. From 2023/24, this will be a separate levy but for 2022/23 it will be introduced by increasing the rates of Class 1 (employee and employer) and Class 4 (self-employed) National Insurance contributions (NIC). This means that Class 1 NIC will increase for employees from 12% to 13.25% and Class 4 will increase from 9% to 10.25% (below the Upper Profits Limit). Above this, the rates will increase from 2% to 3.25% in each case.

From April 2023, the Health and Social Care Levy will be separated out and will apply to all income from employment or self-employment – including for those who have reached state pension age.

The Government confirmed they had changed the rules to ensure all child benefit claimants with children in their last year of full time non-advanced education would be paid child benefit up to 31 August if exam cancellations due to COVID-19 would have otherwise prevented them from being entitled to three months of child benefit payments.

It was also confirmed in the Budget that the Government has ensured that individuals coming to the UK from Afghanistan, including under the Home Office resettlement schemes, are eligible for Child Benefit and DWP income-related benefits from their first day in the UK.

The ‘rabbit from the hat’ announcement of this Budget was the reduction of the universal credit (UC) taper from 63% to 55%. Universal credit is currently reduced by 63p for every £1 of earnings (after tax) above a claimant’s work allowance amount. This change, which will be introduced by 1 December 2021, will mean people can keep more of their earnings before their UC starts to be reduced. The change was coupled with a further announcement that the work allowances will be increased by £500 over the course of a year. This also means working UC claimants will keep slightly more of their earnings, because it delays the point at which the taper starts. However, not everyone qualifies for a work allowance – for example, single UC claimants and couples with no children or disabilities do not currently get a work allowance.

One notable point is that no similar announcement was made for those in receipt of working tax credit. This means that in some cases, people may be better off on UC than tax credits when the changes are implemented. However, LITRG are warning all tax credit claimants to seek advice before making a UC claim due to the complicated rules – once a UC claim is made, tax credits (and any other benefits that UC is replacing) will stop and HMRC say they cannot be reclaimed even if there is no entitlement to UC.

For many years, LITRG has highlighted the high marginal deduction rates faced by low-income workers in receipt of UC and tax credits. High marginal deduction rates reduce work incentives and, as the Chancellor acknowledged in his speech, the UC taper rate is therefore effectively another tax for those on the lowest incomes. Changing the taper rate and increasing the work allowance is a better, more targeted way to help low-income workers compared to, say, increasing the tax personal allowance (which has no benefit for those already below it or otherwise the benefit may be reduced by the UC taper rate).

Although no specific changes were announced, the Minimum Income Floor (MIF) is set by reference to the national minimum wage (NMW) rates. This means the MIF will increase from 1 April in line with the announced 6.6% increase to the national living wage.

The MIF applies to self-employed UC claimants who are found to be gainfully self-employed and who are in the ‘all work requirements’ group. There is a 12-month start-up period for all claimants where it will not apply. It means that if self-employed earnings are below the level of the MIF (usually 35 hours at the appropriate NMW rate), the MIF will be used to calculate their UC award rather than actual earnings. Those subject to the MIF may see their UC award reduce from 1 April 2022 as the higher NMW rates will mean their deemed earnings will be higher.

Transition to UC from legacy benefits

The Chancellor announced that individuals affected by COVID-19 will continue to benefit from temporary changes to new style Employment and Support Allowance (ESA) until 24 March 2022. These changes enable those eligible to claim new style ESA from the first day of absence from work, rather than the eighth day.

Unfortunately, despite LITRG representations, the Chancellor did not announce any increase to the HICBC threshold. This therefore remains at £50,000, and basic-rate taxpayers will continue to be potentially affected despite the original policy intent that it would only affect households with higher-rate taxpayers.

Following the decision of Wilkes v HMRC at the Upper Tribunal on 30 June 2021, in which Mr Wilkes successfully argued that HMRC were unable to use certain ‘discovery assessment’ powers to collect backdated assessments of the HICBC where the taxpayer had failed to notify their liability, the Government have stated that they will legislate to prevent further challenge on this point. The change will apply both retrospectively and prospectively, unless taxpayers had already submitted an appeal before 30 June 2021 which was either based on the same arguments as Mr Wilkes or otherwise had been stood over by the Tribunal pending the final outcome of the Wilkes case. This means that those who had made an ‘opportunistic’ appeal after the Upper Tribunal decision in Wilkes, even if before the Budget announcement, look set to be unsuccessful.

The new ‘discovery assessment’ powers will also apply to other standalone tax charges which operate in a similar way to the HICBC, such as Gift Aid tax charges (where donations are made under the Gift Aid but the donor has not paid enough tax to cover the tax relief claimed by the charity) or certain pensions tax charges.

This significant increase in the National Living Wage from £8.91 an hour to £9.50 an hour has been reported as an increase of £1,074 a year for someone working full time at the current NMW from April 2022. However, that is the gross amount and it doesn’t account for tax (at 20%) and National Insurance contributions (which increase to 13.25% from April 2022), meaning it is actually worth £716.76 a year. For some universal credit claimants, the value of the NMW increase is further reduced to £322 even after the cut to the taper rate explained above.

Currently, most people have to report and pay Capital Gains Tax after selling UK residential property within 30 days of completion. LITRG has previously highlighted that this period is too short and called on Government to increase it to at least 90 days.

The Chancellor announced that legislation will be introduced in Finance Bill 2021/22 to extend the 30 day deadline to 60 days. The change will apply to sales that complete on or after 27 October 2021.

Following a short consultation over the summer, the Government confirmed that they will go ahead with basis period reform for the self-employed (individuals and partners in partnerships). Current rules mean that the self-employed are taxed on their profits based on their accounting date which can lead to overlapping basis periods and tax charged twice on the same profits, with a need to then claim overlap relief at a later date.

The changes proposed will mean that a businesses profit or loss for a tax year is the profit or loss arising in the tax year itself, regardless of the accounting date. This is intended to simplify the system.

LITRG’s response to the consultation was generally supportive of the new proposals as they mean complicated rules around basis periods become obsolete which will be easier for unrepresented taxpayers to understand. We also recognised that for some bigger businesses there may be commercial reasons to have a different accounting date and therefore this would increase complexity for those businesses.

However, we were very concerned at the time frame envisaged for implementing the change (starting in April 2022) and we therefore welcome the Government’s announcement that this will not begin until April 2023 (the transitional year) with the new rules applying from April 2024 to align with the introduction of Making Tax Digital for Income Tax.

Tax relief on pension contributions is given to individuals in two different ways: relief at source (RAS) and net pay arrangements (NPA). The difference in operation between these two methods means that over 1.2 million people in NPA schemes do not benefit from the same government incentive as RAS schemes. Over 75% of those affected are women and the average amount lost is £53.

LITRG, along with a number of other organisations as part of the Net Pay Action Group coalition, has been calling for government action to address this issue for a number of years.

In response to this, the Chancellor announced that the government will address this inequality and from 2025/26 the government will introduce a system to make top-up payments in respect of contributions made in 2024/25 onwards to those low-earning individuals in net pay arrangements.

This is of course a welcome announcement. However, it is disappointing that there will be no historic payments made. We are also concerned that the new process will require people to take some sort of action to secure the top-up payment, which may discourage people from accessing the top-up. In our Budget day press release, we called on Government to automate the payment as far as possible.

In September, the Government announced a new Household Support Fund in England to provide support to those in need as the country continues to recover from the pandemic. The £500 million pound will be distributed by Local Authorities from October 2021.

The Chancellor confirmed in the Budget that legislation will be introduced in Spring 2022 to clarify that the payments made through the fund, and via equivalent schemes in Scotland, Wales and Northern Ireland, will not be taxable.

The Chancellor announced that additional regulation making powers will be given to Ministers to allow them to provide income tax and National Insurance reliefs on specific expenses or benefits-in-kind in the event of a disaster or emergency of national significance.

This has been introduced following the difficulties faced during the pandemic when employers found themselves having to consider tax implications of additional expenses. Although HMRC did clarify the tax position for some of these expenses, there was a period of uncertainty and various exemptions had to be introduced. Hopefully, this will allow things to be done quickly if needed in the future.