The Low Incomes Tax Reform Group are pleased to respond to this consultation which sets out the details of the new OECD rules and seeks views on the UK’s proposed implementation of the rules, including the optional/discretionary elements. 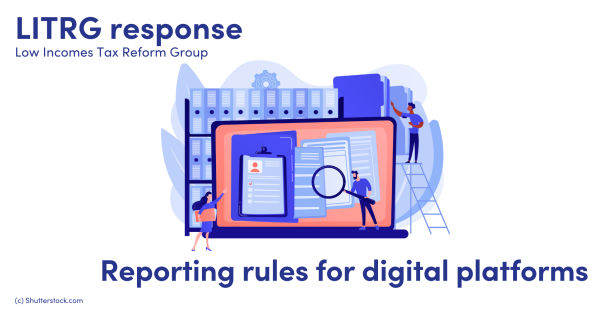 Platforms provide many people with the opportunity to make some money who might otherwise struggle to find work. The gig economy in particular, is a big economic phenomenon that has expanded quickly in recent years. However, many people are at best confused and at worst completely unaware of their tax obligations especially when participating in the gig economy.

Until now, there has been somewhat of a minimalist approach to helping gig workers with their tax from the platforms. However, the new OECD rules mean that from January 2023, most platforms (other than excluded platforms) that facilitate the online selling of goods and services will have a responsibility to:

Although we are concerned about the potential for this data to be used by the authorities for other purposes (for example, Universal Credit), these new rules do have the potential to help tackle the problems identified of income not always being visible to tax authorities and taxpayers not always self-reporting.

However, as we identify in our response, they will not be a complete solution, particularly if HMRC do not use the information they receive in a timely manner. As such, we urge the UK authorities to keep working in this space, including continuing to consider other options like withholding, and producing specific tailored guidance for workers and other targeted tools and resources. Crucially, HMRC will need to help taxpayers understand that they still have a responsibility to check for income not captured on any statement they receive.

HMRC should be aware that for various reasons that we explain in our response, the information collected is likely to highlight significant mismatches in terms of income generated versus transactions/activities which have been declared to HMRC. Obviously, HMRC will need to be adequately resourced to deal with the all issues that could arise from the introduction of these rules. Additionally, with our eye – as ever – on the practicalities, in our response, we raise some other points around issues and impacts we have identified with HMRC’s proposed implementation of the rules. For example, we wonder if the operational cost for platforms in complying with the new burdens put on them are likely to ultimately be passed on to workers, which could result in some of them moving ‘off platform’ to sell their goods and services.

The consultation can be found here.

The LITRG response can be found here.