How does tax credit childcare support interact with other schemes?

Help with childcare costs is a complicated area because the Government offers different schemes. Each scheme has different qualifying rules and often the amount you receive can be different. Sometimes if you claim help from one scheme, that can stop you claiming help from other schemes and so you will need to try and work out which one is better for you based on your circumstances.

This section explains how the childcare element of working tax credit interacts with other childcare schemes. 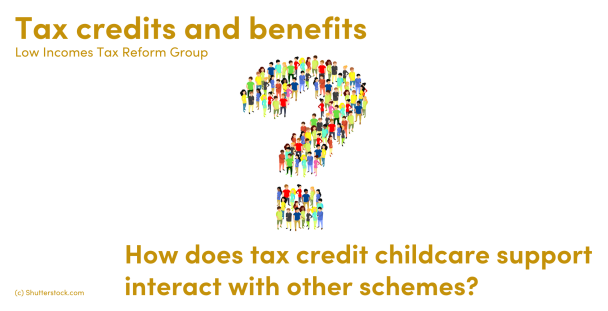 There is nothing to stop you receiving tax credits and childcare vouchers at the same time. However, you can only claim help through tax credits for costs you actually incur. This means you must deduct the value of any vouchers from your average weekly childcare costs for tax credit purposes.

For example, if your childcare costs are £150 a week for one child and you get vouchers of £55 a week from your employer, you can only include £95 a week as your costs for the childcare element of tax credits.

However, if you have sacrificed some of your salary to get childcare vouchers the income figure you declare for tax credits will be lower than it was before the sacrifice (subject to the £2,500 disregard for falls in income).

Some people who qualify for tax credits are likely to be better off claiming help through the childcare element of tax credits and not taking childcare vouchers offered through a salary sacrifice. This is because initially you will lose significantly more tax credits than you will gain in tax and National Insurance savings from taking the vouchers and over the longer term you will gain only a small amount from the vouchers. This example shows how the interaction between the two schemes works:

How does tax credit childcare support interact with other schemes? by LITRG

However there are some exceptions to this rule. For example, if your childcare costs are a lot higher than £175 a week for one child or £300 a week for two or more children then you can claim vouchers as well as the maximum amounts of tax credits. Similarly, if your employer offers you vouchers in addition to your salary (rather than as a salary sacrifice) you will be better off taking them.

This means it is important that you check your own position carefully and work out which is better. You should contact a welfare rights adviser at a local advice agency for further support.

Both working tax credit and child tax credit are gradually being replaced by universal credit (UC). You cannot claim both together. UC is now available across the UK and HMRC state that it is no longer possible to make a brand new claim for tax credits. Eventually, everyone who is currently claiming tax credits will be moved across to UC. In some cases, a change in your circumstances (for example if you change from a joint to a single household or need to claim another benefit that UC is replacing) may mean your current tax credit claim ends and you claim UC instead of tax credits. You can find out more about the introduction of universal credit in tax credits and benefits. You can find out more about childcare support in UC on our universal credit and childcare pages.

Tax credits and other childcare support

Under TFC, you must open a childcare account and for each 80p you pay in the Government will pay 20p up to a maximum of £2,000 per child, per year (£4,000 per disabled child, per year). However, you cannot claim tax credits and tax-free childcare at the same time. If you claim TFC, your whole tax credits claim (working tax credit and child tax credit) will end automatically.