If you are looking for a personal assistant (PA) to help you live independently at home, one option is to ask a care agency to find you a suitable PA. You can pay for an agency PA using your own money or, if you qualify for Government support, you may be able to use that money to pay for an agency PA. 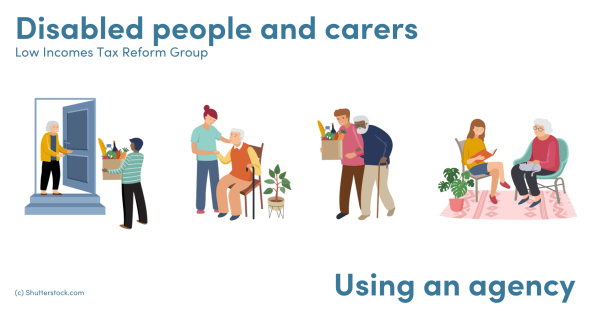 What types of care agencies are there?

There are two main options - an ‘introductory’ agency or a ‘fully managed’ agency.

With an introductory agency, training and background checks are provided, but you (as the client) then pay the PA directly using government funding or your own money and take responsibility for managing them (including finding a replacement if the PA is off sick or on holiday).

There are important differences between the two – for example, introductory agencies are not regulated by the Care Quality Commission (England’s regulator of health and social care services), whereas managed agencies are.

There are tax differences too as managed agencies fall within the scope of HMRC’s agency legislation, whereas introductory agencies (provided they are genuinely only making the introduction) don’t. (The agency legislation means that agencies who pay workers may need to operate PAYE on the payments they make to workers.)

Will I become an employer if I use a fully managed agency?

If you take on a PA through an agency that pays and manages the PA, under the ‘agency legislation’, the agency will be the employer and will be responsible for many things including deducting tax and National Insurance contributions.

You will enter into an agreement with the agency which sets out what tasks the PA will cover and the terms and conditions covering your payments to the agency and other important issues.

What if I use an introductory agency?

There are many introductory agencies in the care sector that purport to introduce self- employed PAs/carers (particularly live in ones) to people who need care (which they charge a fee for).

Based on HMRC’s guidance (in ESM4015), and the recent case of Chatfield-Roberts, most live in carers are likely to be employees and not self-employed under the general status tests.

Once your PA/carer has been matched with you, it is for you, as the person engaging the PA/carer, to decide whether you need to treat them as an employee or self employed by applying the general status tests. Treating a PA/carer as self-employed because an introductory agency says so (when they are in fact your employee), leaves you potentially non-compliant with your tax and employment law obligations and potentially facing significant back payments and even penalties. Make sure you understand your PA’s employment or self-employment status for yourself before they start work.

Is using a managed agency more expensive than paying my own carer?

The rates charged by managed agencies for agency PAs may vary and may appear higher than employing a PA directly. This is because the agency will be responsible for all underlying employment costs such as holiday pay and sick pay and so they factor this into the rates they charge to the users of their services. As they are a commercial business, they will also want to build in a margin for themselves.

What are the advantages and disadvantages of using a managed agency?

One advantage of using a managed agency is that they will be able to provide cover for sick leave or annual leave. You will not have to deal with the tax and employment law responsibilities that come with taking on your own PA.

One disadvantage is that you may be sent different agency PAs rather than building a relationship with just one person.

The Care Quality Commission and the United Kingdom Home Care Association can give you some information on what to look for when looking for an agency to supply your PA.

What is a ‘self-employed’ agency/PA?

In general, most fully managed agency PAs should be taxed through PAYE under the agency legislation, which means the agency collects tax and national insurance from their wages and pays it over to HMRC.

Where the agency has to operate PAYE then it also has to pay employer National Insurance in respect of the worker's wages. This is a cost to the agency, however it is usually covered in the fee that is charged to you, as the end client, by the agency.

Historically, some managed agencies tried to avoid having to operate PAYE for workers – this meant that their costs were reduced, the benefit of which was sometimes passed on to the end client by charging slightly lower fees. They did this by saying that the worker was 'self-employed', so that the worker had to pay their tax and NIC to HMRC themselves and there was no employer NIC to pay.

However, treating a worker as ‘self-employed’ like this, left them in a vulnerable position and meant that the government was losing money.

There are therefore rules in place since April 2014, which essentially say that the only time a managed care agency can escape operating PAYE is where the worker is NOT under the supervision, direction or control (or the right thereof) of any person (including the end client) as to the manner they undertake their work. Please note that workers are assumed to be under supervision, direction or control, unless it is shown otherwise.

As such, and as part of the sign-up process, they may ask the end client (you) to complete a checklist or questionnaire, in writing for their records, so that they can establish whether the worker will be under supervision, direction or control (and thus, whether they have to operate PAYE).

If you decide to use a managed agency to provide you with a PA and you find yourself in the situation where you are asked questions about what supervision, direction or control the worker will be under, you must answer these questions accurately and carefully. In the event of an enquiry by HMRC, any questionnaires you have completed will be closely examined and HMRC could come to you instead of the agency for any unpaid PAYE in situations where it should have been operated but was not, depending on their interpretation of the information provided by you to the agency.

Managed agencies must send details to HMRC of workers they place with end clients where they do not operate PAYE. This means HMRC have visibility over agency worker engagements.

HMRC provide extensive guidance which includes examples of where HMRC would consider that the manner in which the worker provides their services is not subject to supervision, direction or control.

From the guidance, we can see HMRC consider that supervision, direction and control are best defined as follows:

They also give a helpful example of where they think supervision, direction and control would not apply in the context of a PA (see page 14 of the document accessed through the link). However, where you give instructions to the PA and have procedures which must be followed by them, it is likely there will be supervision, direction or control over the manner in which the services are provided and therefore a PAYE obligation on the agency.

It may be tempting to give the agency information which means that they do not operate PAYE, as this may mean lower costs for you. However, where there is any element of doubt, then it is best to err on the side of caution and tell the agency that the worker will be under your supervision, direction and control, so as to protect yourself as best as possible from any potential problems with HMRC at a later date.

Why else might I need to consider whether the agency PA is under my supervision, direction or control?

Managed agency PAs often work on lots of different engagements and may incur substantial travel costs in getting to their various work locations, from their homes. However agency PAs (and other temporary workers employed through an employment intermediary) are prevented from claiming relief on their home to work travel and subsistence expenses if they are under the supervision, direction or control (or the right thereof), of any person, as to the manner in which they undertake their role.

There are debt transfer provisions that you should be aware of in situations where tax is underpaid because of false information about supervision, direction or control provided by you, to the agency.

What if my agency PA is from an ‘offshore agency?’

An offshore agency means an agency that is situated outside of the UK – sometimes to in order to take advantage of lower taxes or costs or less stringent regulation.

If the agency that you use is an offshore agency, please be aware that in some circumstances (i.e. where they consider themselves outside the reach of HMRC and do not operate PAYE), you – the end client – may be obliged to operate PAYE.

HMRC’s guidance on the matter can be found in their Employment Income manual.

Although offshore agencies are not as prolific as they once were, it is important to ensure you check whether the agency that you are using has a trading address in the UK. Please remember that the Isle of Man and the Channel Islands (e.g. Jersey and Guernsey) are ‘offshore’ in this context.