Complaining about misleading information from HMRC

This page looks at how you can complain to HMRC about costs or difficulties you have incurred as a result of an underpayment shown on a Pay As You Earn (PAYE) P800 tax calculation where you feel HM Revenue & Customs (HMRC) have given you misleading or incorrect information and/or advice. 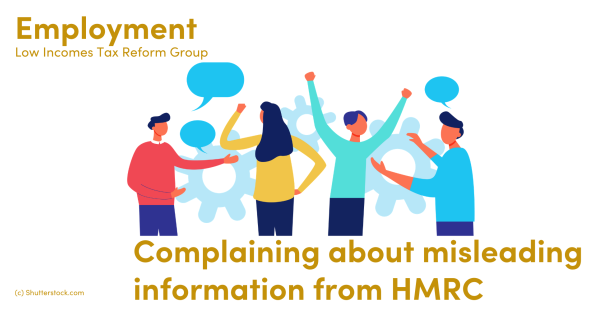 When might I have cause for complaint to HMRC about not having paid enough tax under PAYE?

If you made contact with HMRC in a year prior to or during the year under dispute and:

then you may have grounds for an official complaint against HMRC. This could result in a consolatory payment or compensation or reimbursement of costs incurred.

What evidence do you need to make a complaint about HMRC having misled me?

Clearly it is very helpful if you have retained copies of letters you have either sent or received.

Also, you might have looked at GOV.UK and been misled by information you found there – perhaps you saved or printed a copy? Or, if you remember when it was, you might be able to find a copy in the National Archive of GOV.UK pages. This would be useful evidence.

If you think you were misled during a telephone conversation it is a little more difficult. We always recommend when you call HMRC that you record the date, the time, the name of the HMRC telephone adviser and who said what.

But what if you did not do that or HMRC have a different record of what was said? This is where it is important for you to know your rights to obtain information that may be held within HMRC files.

Due to data protection laws, you can make a ‘subject access request’ where you can ask a Data Controller, in this case HMRC, for copies of any or all telephone conversations, computer records and correspondence about you and between you, or someone acting on your behalf, and HMRC.

The Information Commissioner’s Office explains more about your rights and how to make a subject access request.

Armed with the additional information received from this request you may be able to continue your complaint. When writing your subject access request letter, you will need to consider for what time period you are asking about. You might find that you need information for earlier years if the problem originated some time ago.

Note that HMRC cannot usually charge you for answering a subject access request and they have to answer you within a certain time limit.

What should I do when I have gathered evidence about HMRC having misled me?

If, at the end of gathering all relevant information, you do not consider that you have been treated fairly or correctly, you can make a complaint.

Beyond HMRC’s own complaints process there are two independent bodies, the Adjudicator and the Ombudsman. These can give protection against HMRC failing to operate their own processes or to give insufficient recognition of the levels of understanding that the ordinary citizen should need in dealing with their tax affairs.

If you are turned down for an ESC A19 write-off, you can take your complaint onwards to the Adjudicator.