Many countries have laws which mean that tax residents of that country pay tax on all income, irrespective of where it arises (this is broadly the case in the UK – if you remain UK tax resident, you continue to be subject to UK tax on worldwide income). Many countries in the world also have laws that state that income which arises in that country is taxed in that territory, irrespective of whether the taxpayer is tax resident there.

This means that if you are a UK tax resident working overseas, a UK tax liability may arise on your foreign employment income. Since you may also have to pay tax in the other location (because it arises there), this may lead to double taxation implications. Students who have temporarily left the UK to work overseas may find themselves in this situation. 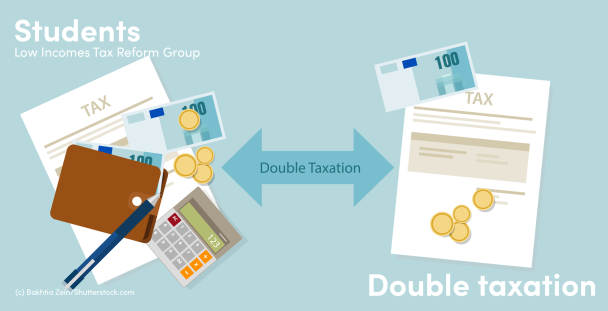 How do I avoid paying tax twice?

The UK has an extensive network of double tax treaties with other countries. One of the functions of these treaties is to prevent double taxation by ultimately allowing only one country to tax your earnings (if you are a UK national, this will typically be the UK) or by allowing a credit for the foreign tax paid when calculating the UK tax liability on the foreign income.

The method of double taxation ‘relief’ will depend on your exact circumstances, the nature of the income and the specific wording of the treaty between the countries involved. You should also be aware that some countries do not have a double tax treaty with the UK. If that is the case, you may still be able to claim unilateral tax relief in respect of the foreign tax you have paid. Unfortunately, there are no hard and fast rules and you will probably need to seek some professional advice if you find yourself in a ‘double taxation’ situation.

Here we look at two examples. Please note that the foreign tax rules have been discussed for the purpose of the illustrations only and should not be taken as reflective of the true New Zealand or Australian tax positions.

Mary is on a gap year and leaves the UK to go to New Zealand for around four months on 1 July 2022 after her exams. She does not earn any money in New Zealand – instead she volunteers in an animal sanctuary. She returns to the UK on 1 November 2022 but already knows that she wants to go back to New Zealand as soon as possible. She works hard over the Christmas period and by 15 January 2023 has saved up enough money to return to New Zealand, where she stays, travelling around, until May 2023.

⚠️ Note A person’s residence status elsewhere under foreign country rules is irrelevant in determining their UK tax residence status (under UK rules), as it is possible to be resident for tax purposes in two countries simultaneously.

Under UK rules, Mary remains UK tax resident for 2022/23 under the Statutory Residency Test even though she has less than 183 days of physical presence in the UK as she has her only home in the UK (albeit her parent's home) for all or part of the year. She is therefore taxable in the UK on her worldwide income. Under New Zealand's rules, Mary is tax resident there from the date of her first arrival in July 2022 until May 2023 (due to being there for more than 183 days in a 12-month period) and so they may want to tax her worldwide income in this period too. This leaves her Christmas job income potentially subject to both UK and New Zealand tax, due to her being treated as tax resident in both countries.

Mary can look at the double tax treaty to see if it can help avoid this double taxation situation. Where it is a ‘dual residency’ situation that is causing the double tax issue, most treaties contain a series of ‘tie breaker’ tests to help determine which country’s residence takes precedence. They generally say the ‘winner’ country is:

The answer to the first test for Mary is the ‘UK’ as this is where her family home is. As she meets the first test, she doesn’t have to look at the remaining tests. It is unlikely that she will be considered to have a permanent home in New Zealand – but even if this is the case, her centre of vital interests appears to be in the UK and therefore we arrive at the same outcome. This means that Mary is treated as 'treaty resident' in the UK and 'treaty non-resident' in New Zealand – these special treaty rules override the actual position as regards the income covered under the treaty.

It is worth noting that had Mary worked in a restaurant (say) in New Zealand, rather than gone travelling there when she returned in January 2023, then this income could give rise to another double taxation situation for her to tackle. However New Zealand would not give up its right to tax Mary on her restaurant income due to it being sourced there. Double taxation would have to be avoided on this particular source of income in the manner described in Example 2 below.

Mark is on a gap year and leaves the UK in August 2022 for a five-month working holiday to Australia. He works in various bars, earns the equivalent of £5,000 and pays Australian tax at the non-resident tax rate of 32.5% (£1,625). Mark also earned £1,200 a month (no tax deducted) from a casual job he had in the UK for the other 7 months of that tax year.

Under UK rules, he remains UK tax resident due to the 183-day rule, so he is taxable in the UK on his worldwide income. Mark is not resident in Australia, but the employment income is Australian ‘source’ so it is also correctly taxable there. In this scenario, instead of just being able to exclude the income from one of the countries’ remits, the double tax treaty tells Mark that Australia has the main right to tax the income and that if the UK also wants to tax it (under its own rules) then the foreign tax credit method should be used to avoid double taxation.

You should note at this stage, that a foreign tax credit will be limited to the UK tax liability on the foreign income, meaning that you will always end up paying at the higher of the two rates.

We can see here that there is no UK tax ultimately due on the Australian income. The foreign tax credit means that Mark only ends up paying Australian tax on his Australian income at the Australian rates. It is a different method of preventing double taxation. This is the method of double tax relief that you will come across most often where you have remained tax resident in the UK but have employment income arising in another country.

We know this is very complex, but there are two things to remember before you get too concerned with double taxation:

Our Examples section also looks at double taxation in the context of several other typical ‘students leaving the UK’ scenarios.