We have looked at some of the theoretical things to consider from a tax perspective, when going abroad, such as your residency position, double taxation and dealing with HMRC.

We can now go on to see how the technical rules apply in practice in the examples Max, Ahmad, Cerys and Victoria. Hopefully this will help things fall into place. 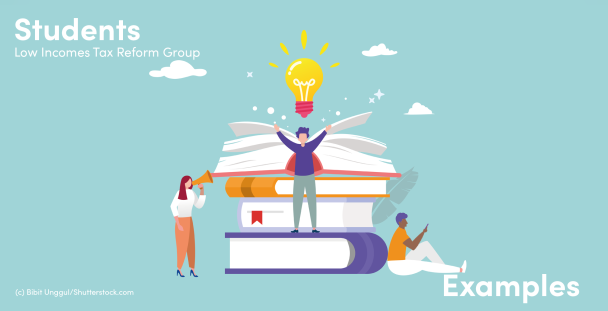 Note: in many typical outward student scenarios we wouldn’t expect things to get as complicated as in some of the examples here. As explained on our Double taxation page, even if you remain taxable in the UK on your overseas income, the generous tax-free personal allowance will often cover it all and there will be no overseas liability to inform HMRC about (you may however, still need to send in a form P85).

Nevertheless, we would encourage you to look through all of the examples even if they don’t seem immediately relevant to you, as you will pick up useful information to stand you in good stead for dealing with your tax affairs in the future.

Note that these examples are indicative of the UK position only. You may need to take professional advice for your specific circumstances, including in the overseas country.

It is important to note that we are only looking at the tax issues here and there may be other non-tax matters to consider, such as immigration, which you may have to seek some advice on.

Per the Statutory Residency Test, Max is considered UK tax resident throughout 2022/23 as he has his only home in the UK for all or part of the year (albeit his parent’s home), even though he has less than 183 days of physical presence in the UK. This means he is taxable in the UK on his worldwide income, even though he has paid tax in France on his language assistant earnings.

The UK will give a foreign tax credit to avoid double taxation on the language assistant earnings.

In the calculation above, the availability of the personal allowance means that Max does not have to pay tax on any of his UK earnings. The tax liability arises on the French income, part of which exceeds his personal allowance. The foreign tax credit serves to extinguish most of the UK tax liability on his French earnings – but not all. Max is therefore entitled to most of the UK PAYE he paid on his pre-departure earnings back – the rest is offset against the £126 shortfall.

It is worth noting that usually foreign taxes would need to be paid at a rate at least equivalent to the UK tax rate due on the foreign income (usually 20%) to fully extinguish any UK tax liability. However, in this example Max has some of his personal allowance available to use against his French income, meaning the effective UK tax rate on it is lower than 20% and the relatively small amount of French tax he paid nearly covers the UK tax liability on the French income.

Ahmad: studying and working abroad for a year (no foreign taxes paid)

In the period 6 April 2022 to 15 September 2022, (during Ahmad’s second year of university and into the summer holidays) he works as a temp around his studies. He earns income of £5,120 and has no tax deducted at source under PAYE (he earns too little to trigger any deductions). On 18 September 2022 he moves to Germany to spend his third academic year at Dusseldorf university (he comes home for a month at Christmas). In the period 18 September 2022 to 5 April 2023, he earns the equivalent of £7,500 in Germany from an evening/weekend job. He has no German taxes to pay due to the availability of a nil rate band, which his earnings fall into.

Per the Statutory Residency Test, Ahmad is considered UK tax resident throughout 2022/23 as he was present in the UK for more than 183 days. This means he is taxable in the UK on his worldwide income. His 2022/23 UK tax calculation would look like this:

Ahmad has had no tax deducted at source in either country, yet his income when totalled together exceeds the personal allowance. Therefore, Ahmad has to pay £10 to HMRC and will need to complete a tax return to report the foreign income.

In 2023/24, assuming Ahmad continues to work in Germany for the beginning part of the tax year and then returns to the UK at the end of August 2023 to take up his fourth year of university, he will again be UK tax resident and a similar reconciliation will need to occur at the end of the 2023/24 tax year to identify the UK tax position on the German income.

If Ahmad starts working in the UK after his return then it would be a good idea to state on his new starter information (previously known as form P46) ‘this is now my only job, but since last 6 April, I have had another job’ to reflect the fact that he was working in Germany in the first part of the tax year.

Provided he does this then he should not be given the benefit of the unused personal allowance since the start of the tax year to set fully against his UK earnings for the remainder of the year. This means it will be available to set against his German income when he does the reconciliation and the likelihood of there being a significant underpayment of tax at the end of the tax year is reduced.

A foreign tax credit can reduce a UK liability to nil, but sadly cannot create a tax repayment. Imagine Cery’s situation. In June 2022 she finishes her first year of university, during which she did not work as she wanted to concentrate on her studies and decides to go to New Zealand over the three-month summer break.

She will remain tax resident in the UK for 2022/23 as she has more than 183 days of physical presence in the UK.

She wants to support herself by doing some casual work under a Working Holiday scheme. She earns the equivalent of £3,000 and pays £300 NZ tax (none of which is refundable to her from the NZ authorities). This is her only income in the entire UK tax year.

⚠️ Note: as the foreign tax paid has exceeded the UK tax on the foreign income (due to the availability of the UK tax-free personal allowance), then the excess foreign tax credit is wasted. It is unlikely that HMRC will expect a tax return to report this situation.

It is worth pointing out that Cerys could have earned £9,570 more in 2022/23 without having to pay any UK taxes. To the extent that she had worked in the UK and earned this amount, any UK tax deducted under PAYE would have been eventually repayable to her.

Victoria is a UK national. She finds an English taught degree course in Amsterdam that she would like to do, where the tuition fees are lower than in the UK. This is a three-year course starting on 15 September 2022. She lives in student accommodation in Amsterdam and works casually in a restaurant earning EUR 50 a shift, cash in hand. This is her second job in 2022/23 – her first one was a one-off modelling job in the UK in May 2022, where she earned £10,000. She comes back to the UK for a week at Christmas, a couple of days at Easter and one week over the summer to see her family and she always stays in her family home during this time.

In 2022/23, Victoria will probably be tax resident in the UK as she has her only home in the UK (albeit her parent’s home) for all or part of the year, even though she has fewer than 183 days of physical presence in the UK.

The first thing Victoria should do is seek some advice as to what, if anything, she needs to do to ensure she is compliant from a Dutch tax perspective. It may be correct for her employer to pay her in cash, but the last thing you want is to get on the wrong side of a foreign tax authority due to inadvertently underpaying taxes.

Here we assume there is no Dutch tax credit on the basis that she has paid no Dutch tax. As there is hardly any of her personal allowance left either, there will probably be a UK liability on the Dutch earnings, so she should register for a 2022/23 UK tax return.

For 2023/24 Victoria spends the entire UK tax year (apart from 10 days) in the Netherlands. Under the Statutory Residence Test, she is classed as non-resident during 2023/24 due to the very low level of physical presence in the UK (fewer than 16 days). Her Dutch restaurant income now falls outside of the UK tax ‘net’ and is taxable in the Netherlands only.

As a non-resident, Victoria will only be taxable on UK source income in 2023/24 in the UK – any UK bank interest, dividends or rental income for example. She does not have any, but if she did, she would still have the benefit of the UK personal allowance to set against such income because she is a UK national.

If Victoria completes a 2022/23 UK tax return, then HMRC may well issue one for completion for 2023/24 too. If Victoria does not consider that she needs to complete it (because she is a non-resident and has no UK source income), she can phone HMRC and explain that she is non-resident with no UK source income and ask them to withdraw it. If she does not do this but also does not take action to file it, late filing penalties may accrue unnecessarily – they can be up to £1,600!

Please note that even if Victoria does end up being classed as tax resident in the UK for 2023/24, it is likely her Dutch earnings, if they are her only income, will fall under the UK personal allowance, so this does not change the bottom line of there being no UK tax to pay.