Taking on an employee 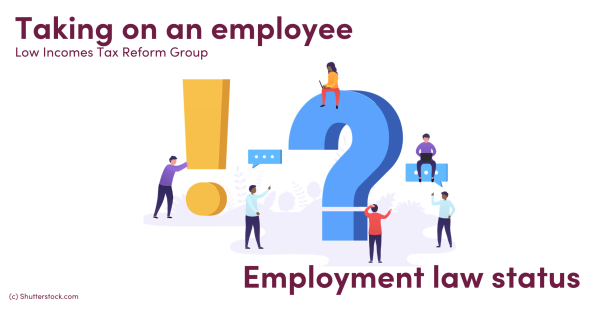 What is employment law status?

Employment status describes the working relationship between someone providing work and someone doing the work. The employment status of the person you take on determines the rights that they have and the responsibilities you have towards them in employment law.

Is it the same as tax status?

Employment law status is different from tax status. It is possible that the person you take on may have a different status for employment law purposes than for tax purposes. It is important that you check carefully the status for each. We explain more about the tax status and how to decide this in respect of your worker in our tax status section.

What are the different types of employment status?

'Worker' has a technical meaning in law as well as referring to the working population more generally. A ‘worker’ in the technical sense is basically someone who undertakes to do or perform personally any work or services and normally can’t send someone in their place. Their contract is not with their own client or customer, but with someone else’s business.

'Workers' have some core employment rights. They have fewer rights than employees who have extensive rights, but they have more rights than the self-employed who tend to have very few legal protections compared to employed people.

Their work arrangements tend to be 'midway' between self-employment and employment. They have some characteristics of self-employment (e.g. they use their own tools and can decide their own work schedule) but they depend on the other party for their income (or large part of it).

What is a 'worker' – an example

A carpenter who works exclusively for one firm of building contractors will likely be a ‘worker’ even though he may decide his own hours and own way of working, complete his own tax returns, pay his own tax and National Insurance and provide his own tools. He is a ‘worker’ because the building firm has hired him personally to do the work and it would not be acceptable for him to send a sub-contractor or a friend in his place – even though he is otherwise quite independent of the building firm.

If the building firm also set his hours and work tasks each week with specific holidays and wages, he may well be an employee for employment law purposes.

Alternatively, if he had many clients and was only asked to do a one – off job for the building firm, he would probably be self-employed for employment law purposes.

Some individuals such as cycle couriers and taxi drivers working in the gig economy are usually self-employed for tax purposes but have recently been found to be ‘workers’ for employment law purposes by the Courts. For more information about ‘worker’ status, including who it covers and the types of characteristics a court will consider, please see our news article.

It is your responsibility to determine the status of the person you take on for employment law. Like for tax status, it is matter of fact, not choice and there is no single test to determine whether a person is an employee, 'worker' or self-employed. All the relevant factors need to be considered. You can find more information on deciding employment law status on GOV.UK.

In addition, you would also need to consider whether the person you take on has a ‘worker’ status under employment law. ‘Worker’ status does not exist for tax law, therefore HMRC’s tool does not cover it.

An important legal case on status

An important legal case (Autoclenz Ltd v Belcher [2011]) confirmed certain workers who had been classified as self-employed were in fact employees with a contract of employment.

The company involved was a large one offering car valeting and related services. The individuals concerned in the case all had written contracts, the terms of which were quite explicit in saying that they were being engaged as self-employed contractors rather than as employees. The worker was termed a ‘Sub-contractor’. Under the terms of that agreement, the worker confirmed that he was ‘a self-employed independent contractor’.

So given the clear written terms of the contract, how did it all go so wrong for the company?

It went wrong, because the employment tribunal was entitled to ignore the terms of the written documentation and to look, instead, at the reality behind the workers’ contracts. This was because, in the view of the courts, the workers had only one choice: to sign up on the terms dictated by the company or seek work elsewhere.

Once this principle – looking at the reality behind the contracts – was applied, all sorts of findings of fact by the employment tribunal justified its conclusion that these individuals were working under a contract of employment.

The following factors had been influential in that conclusion:

It was also noted that the company provided, at the time under consideration, all the equipment and materials, including jet washers, vacuum cleaners, sponges and chemicals.

In summary, the Supreme Court agreed with the earlier Court of Appeal ruling, which in turn concluded that the employment tribunal was entitled to find that the individuals were working under contracts of employment.

The above employment law case gives a good summary of what the courts will look at when deciding issues of employment status. It is particularly important to note that the parties cannot necessarily rely on the paperwork or contract in place, if the reality of the situation is different.

I'm clear on status – what's next?

Once you are clear on what employment law status your worker has, you can start to think about the rights and protections that they have in work and the responsibilities and obligations that you have towards them.

On the page Employing staff in more detail, we briefly look at the employment law rights of employees. You can find out more about the rights and obligations for ‘workers’ and the self-employed on GOV.UK by following the links below:

Note that employees enjoy many rights under employment law legislation. If you get someone’s employment status wrong (particularly if you treat an employee as self-employed) then this could result in claims for holiday pay, minimum wage and other employee rights like auto-enrolment. This could have serious financial implications and you will probably need to seek professional advice should this situation arise. You can find information on being taken to an employment tribunal on GOV.UK.