Taking on an employee

Most workers are entitled to a minimum wage by law. If you employ someone, you must pay them at least the National Minimum Wage (NMW) or National Living Wage (NLW).

The rules can be complicated. This section gives a basic overview of the NMW and NLW rules and tells you where to find further information. For an overview of other rules that you may need to consider when taking someone on, go to our dedicated employment law section. 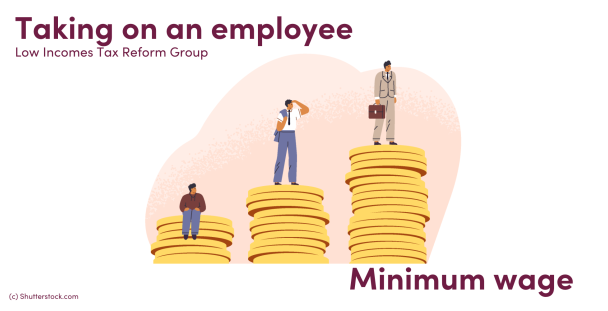 Basic info about the NMW and NLW

Your obligations under the minimum wage rules depend on the arrangement you have with your employee.

If your employee is 1) a family member living in your home or 2) is a non-family member who lives with you as part of your family, sharing housework and leisure activities with your family, then you may not need to pay the NMW or NLW – as explained on GOV.UK.

The rest of this page is for you if these exemptions do not apply.

Almost all employees and ‘workers’ in the UK are entitled to be paid the NMW or NLW – this includes full and part-time employees, agency workers, migrant workers and casual workers. (A ‘worker’ for employment law purposes, is someone who basically undertakes to do or perform personally any work or services for another person as part of someone else's business – see more on 'workers' on our website.)

It is not open to employees or ‘workers’ to opt out of the NMW or NLW.

Pay for minimum wage purposes is the gross pay before deduction of tax and National Insurance contributions (NIC), and deductions from pay such as employee pension contributions, but after certain other deductions have been made.

The minimum wage rate depends on a person's age and if they are an apprentice.

The NLW applies to people aged 23 and over (and not in the first year of an apprenticeship). The NMW rates will still apply to people under 23 and apprentices.

Prior to April 2021, the NLW applied to people aged 25 and over and the NMW applied to those under 25 and apprentices.

While the NLW operates as a higher level of NMW for people aged 23 or over, the same rules regarding things like compliance and penalties apply to both NMW and NLW.

From April 2022, the rates that you need to ensure you are paying are:

It is important to remember that you must pay at least the appropriate minimum wage – you can pay more.

The rates usually change on 1 April each year.

Employing someone on an hourly basis

Your employee may well be employed by you on an hourly basis, in which case the amount they need to be paid at the end of a week say, or a month (whatever their pay period is) should be worked out according to the number of hours they work.

You should make sure you correctly identify the working hours of your employee in each pay period – particularly important if your employee works outside of the normal pattern – e.g. if they start early or finish late one day.

One Tuesday, Alan starts work one hour early to help you with something, so that week you would need to make sure you pay him at least £247 (£9.50 multiplied by 26).

You should note that you do not need to pay employees minimum wage for their lunch breaks or for their travel time to and from work (although you should ensure they are paid it once any travel time they do as part of their job is factored in – see below for more on this). See our employment law section for more information on rest breaks and working time rules.

On GOV.UK there is also a calculator that you can use to check if you are paying the minimum wage.

If your employee is paid an annual salary, then they are still entitled to the minimum wage so you will need to work out their equivalent hourly rate to see if they are getting the minimum wage. GOV.UK contains information about how to work this out.

It can be quite difficult to understand and apply the NMW and NLW rules to some situations that you might come across with your employee. Here we give you some tips on dealing with different scenarios that can sometimes cause difficulty.

You should also be aware that if your employee incurs certain costs that are connected with work, that are not reimbursed by you, these will have the effect of reducing the amount of pay they are taken to have received from you.

For example, for minimum wage purposes, if a worker has to pay for an item of ‘everyday’ unbranded clothing to wear as part of a uniform, such as a pair of black trousers, black shoes or a white shirt, the cost incurred must be deducted from their pay to establish whether at least the minimum wage is being paid.

It is probably counter-intuitive to employers that they need to essentially reimburse staff for such clothing, which may well be worn outside the workplace and which the worker may have bought anyway for their own benefit. In fact, tax law and minimum wage rules diverge somewhat on this issue. Under tax law, the rules are stricter disallowing a deduction for tax purposes on such clothing. A deduction can only be permitted for clothing that is recognisably a uniform or part of a uniform.

To the extent that employees can claim tax relief on their employment costs to help restore their out-of-pocket position, employers should not count potential tax refunds as ‘reimbursements’.

You should be careful about making deductions from your employee's pay in respect of items or expenses that you have provided that are necessary for their employment (such as for a uniform) as these cannot bring down the pay rate below the NMW or NLW.

You can find confirmation of this rule on GOV.UK.

You should also be aware that making an administration charge in respect of processing an employee’s attachment of earnings order can reduce their pay for minimum wage purposes.

You should make sure that your employee is paid at least the NMW or NLW rate for all hours worked, including travel time (which means travelling in connection with work, e.g. driving to a meeting, but not travelling from their home to place of work) – and associated out of pocket expenses such as vehicle mileage.

Tips do not form part of minimum wage remuneration, so must be paid to employees on top of minimum wage pay, (even though for tax purposes they are counted as ordinary taxable pay on the employee and are not viewed as anything extra or special).

You should make sure that your employee's basic rate of pay meets the relevant minimum wage. You may pay them an inflated rate for working on a Sunday for example, but can’t use this to disguise a low rate for the rest of the week.

Where workers undergo training (for example – employment induction or skills development) the time spent on such activities is working time for minimum wage purposes where a contract of employment has started or where it is a contractual requirement for the worker to attend the training. So, if you pay £80 for your employee (aged over 23) to attend an 8-hour long health and safety course, then you would also have to pay them at least £76 (£9.50 x 8) for their wages for the day on top of the cost of the course (and probably more, once their travel time is factored in).

You can see what other things count as working time on GOV.UK.

A salary sacrifice arrangement is an agreement to reduce an employee's entitlement to cash pay, usually in return for a non-cash benefit. This can have tax/NIC advantages for both you and them.

If the minimum wage rate for her circumstances goes up to, say £9.80 in April 2023, then assuming Neena still works 35 hours a week and does not have a pay rise, Neena would only be able to sacrifice around £38.50 of her pay for childcare vouchers, as the minimum amount of cash that her employer must pay her is now £343.

What to do if you discover a shortfall

Self-correcting an error, means that if HMRC (who are responsible for compliance) undertake an investigation, they won’t find an underpayment and you can avoid any action being taken against you.

However, employers have to ‘self-correct’ accurately. It is also important that when they pay any extra amount over that it is clearly identified as NMW arrears. As part of the self-correction process, they must check back up to six years to make sure there have been no similar failings.

In calculating the amount to be paid to your employee in respect of the shortfall, you should use the current NMW/NLW hourly rate, even if the shortfall occurred at a time when the rates were lower. This is in recognition of loss of purchase power your employee may have suffered from the initial underpayment.

The way that you work out the amount you need to pay is by using the formula (underpayment/original rate) x current rate.

If your employee discovers the shortfall and you have not self-corrected it, he or she can report you to HMRC and/or make a claim to the Employment Tribunal.

You should be aware that correcting a shortfall may also mean that you are required to pay additional PAYE tax/NIC to HMRC on a backdated basis and pay additional pension contributions to your employees’ scheme.

HMRC have some guidance on dealing with pay arrears for tax and NIC purposes in section 1.19 of their CWG2 booklet (Further guide to PAYE and NIC).

Essentially, employers should deduct PAYE tax at the rates that were in operation for the years to which the arrears are attributable and in accordance with the employee’s tax code for the year and as if the additional pay had been paid at ‘week 53’ for the year.

The NIC element is worked out differently and is calculated on the basis of the year the payment is made only: it is not related back to prior years.

If correcting a minimum wage error means that you need to pay more pension contributions, you should speak to The Pensions Regulator or the pension scheme provider concerned for further instructions.

By law you have to keep records to show that you are paying your employee the minimum wage and most people rely on their payroll records to do this. Such records now have to be kept for six years.

If HMRC discovers or believes there is a shortfall, it can do things like:

A few employers try and sidestep the minimum wage rules, by doing things like paying cash-in-hand so that hours and wages go unrecorded and forcing workers to say they are self-employed. However, you should know that there are also a number of criminal sanctions for employers not paying someone the NMW or NLW or falsifying payment records.

You can read more about the consequences for employers of not paying the minimum wage on GOV.UK.

You can read the government’s guidance on its approach to enforcement of the minimum wage on GOV.UK.

Basic guidance on the NMW and NLW can be found on GOV.UK. HMRC sometimes make videos and webinars to help employers understand more about the NMW and NLW.

There is a comprehensive employer guide to calculating the NMW and NLW produced by the Department of Business, Energy and Industrial Strategy that you may find helpful, as it covers more complex topics. HMRC's technical manual can be found on GOV.UK.

If there is any uncertainty for you at all about the NMW or NLW, we advise that you contact the ACAS Pay and Work Rights helpline on 0300 123 1100 for further advice.