Your rights and safeguards 5: Penalties

We outline the rights and safeguards the law gives you when HMRC charge you a penalty. 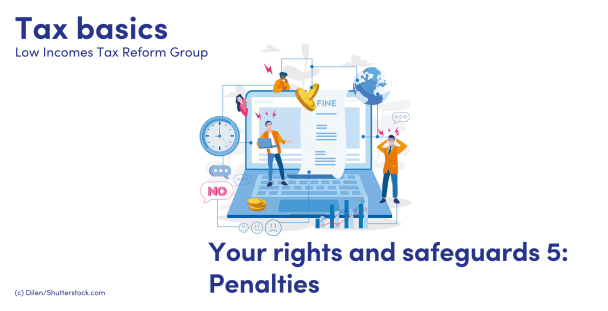 What to do if you disagree

You can appeal if you think that:

For example, HMRC may have charged you a penalty on the basis that an error in a document or tax return was deliberate. You may think that it was only careless, in which case your penalty should be lower. Or you may think that you made the error despite having taken reasonable care to get things right, in which case no penalty would be due.

Alternatively, you may think that you deserve more credit for having told HMRC about the error, and helping them to correct it, than they have given you.

See factsheets CC/FS7a and CC/FS7b for details on how HMRC calculate penalties for errors in returns or documents.

Where HMRC charge you a penalty for a careless mistake in a return or document, the law allows them to suspend payment of the penalty. HMRC’s factsheet CC/FS10 covers suspension. If HMRC refuse to suspend a penalty or set suspension conditions that you wish to challenge, you can appeal.

HMRC can charge a penalty if you do not tell them about certain changes which affect your liability to tax – for example, if you start receiving a new source of income which triggers the need to complete a Self Assessment tax return. HMRC’s factsheet CC/FS11 covers these penalties in more detail.

This penalty regime is subtly different from that for penalties for inaccurate returns in that there are only three categories of failure:

However, no penalty arises if there is a reasonable excuse for the failure.

Unfortunately, the law does not allow HMRC to suspend this type of penalty, but there are provisions for ‘special reduction’. These allow HMRC, in special circumstances, to reduce or stay a penalty, or otherwise agree a compromise. In deciding whether to apply these provisions, HMRC may not take account of ability to pay or the fact that tax might have been overpaid elsewhere which could balance out the underpayment giving rise to the penalty.

If you decide to appeal against a penalty or suspension decision, you must usually do so within 30 days by sending HMRC a written notice that you wish to appeal. You can then decide whether you wish your appeal to be heard by the First-tier Tribunal, or reviewed by a different team within HMRC.

If the latter, you still have the right to appeal to the First-tier Tribunal against the decision of the review team. For more detail see factsheet HMRC1.