What if my claim is checked by HMRC?

HMRC routinely check tax credit awards to make sure they are correct. We take you through the process. 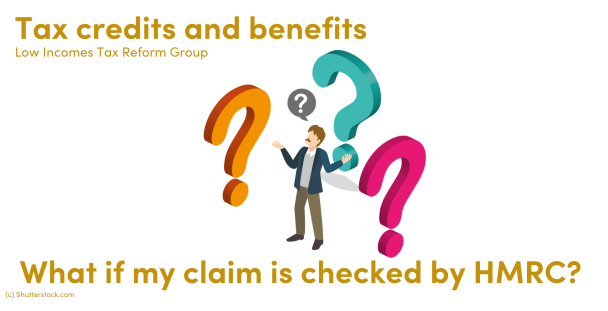 HMRC do this both during the year, while the award is still being paid, and after the end of the tax year (or after in-year finalisation, if relevant). When they check awards, they often ask for extra information or proof of information to make sure the details they have are correct.

What checks can HMRC make?

HMRC can check tax credit awards either at the beginning ie when they receive a new claim before they decide whether to make an award, during the tax year or after the end of the tax year, that is, before they make a final decision on entitlement (between April and the time you renew your claim) or during the following year. Outside those main rules, they can check old awards up to five years from the final decision. This is called ‘discovery’ and can only be done if your income tax position has been investigated and changed or if they think your tax credit award is wrong and it is because there has been fraud or neglect by you.

Examinations are checks on tax credit claims where a final decision has not been made (including new claims). Examinations normally take place during the tax year or following the end of the tax year before you complete your renewal. They can also take place before your claim is processed (pre-claim examinations).

Enquiries are checks on tax credit claims where a final decision has been made. Enquiries normally take place after the tax year has ended after you have renewed your claim (which finalises your claim for the year just ended).

What happens with an examination?

Will my payments stop?

Your tax credit payments should normally continue during an examination. They may stop if HMRC have made a formal request for information from you and you have not supplied it by the date given in the letter asking for the information, or if HMRC have reason to believe that you are not entitled to tax credits or entitled to a lower amount.

Can I ask for the examination to stop?

You cannot stop an examination taking place. If you feel that it should not have started, or has not been properly conducted, the only thing you can do is make a complaint.

What happens next (examination)?

HMRC should send you a letter when a formal check on your claim has started. This letter will ask you for specific information or supporting evidence. If this information is not provided by the date specified in the letter, your payments might stop or reduce and a penalty may be applied. You should send the information they ask for and anything else that you think might be useful. If you are sending important documents, such as passports or bank statements, it’s a good idea to send these recorded and get proof of posting. HMRC should send these back to you after they have checked them. Or, in some cases you can send scanned images of original documents to HMRC online via HMRC’s digital tax credit service on the GOV.UK website, ‘Manage your tax credits’, although they may also ask to see the physical document. For some kinds of documents, HMRC might check they are genuine and belong to you. If you have any problems getting the information HMRC are asking for, contact them straightaway to explain this.

HMRC's initial letter may be followed up by a phone call. HMRC may also suggest a meeting. You do not have to agree to a meeting, but it may be a good idea to go ahead, because of the risk of penalties if you are seen to be not co-operating.

HMRC can also visit unannounced if they have tried unsuccessfully to contact you by letter or phone. You can refuse to talk to someone who turns up without an appointment, but another time and date will be arranged. You should let HMRC know if you need to have someone there with you to help you. It is rare for HMRC to carry out home visits.

HMRC should write to you to let you know when they have completed their checks.

You may be asked to sign a copy of HMRC’s notes of the meeting. You should check the notes very carefully before doing this – these notes will be used as evidence when deciding the outcome of the examination.

If, at the end of the examination, HMRC decide you have been getting the wrong amount of tax credits, you are likely to be asked to sign a ‘certificate of full disclosure’. When you sign this, you are saying that you have told HMRC everything relevant to your claim. Make sure this is the case before you sign.

What if I do not agree with the decision?

If HMRC change your award, they will also send you a new decision on your claim – a penalty may also be charged. You can appeal the new entitlement decision and the penalty decision if you think they are wrong. You can find out how to appeal in the appeals section.

What happens with an enquiry?

An enquiry is a more formal process than an examination. When HMRC start an enquiry, they must send you a letter telling you this. Only one enquiry can be made on a particular tax year’s tax credit claim. However, if you have made more than one claim in a tax year (for example, you made a single claim and a couple (or joint) claim in the same tax year) an enquiry can be made on each claim.

Is there a time limit?

There are strict time limits for HMRC to start an enquiry. The usual time limit for starting an enquiry is 12 months from the deadline you had to reply to your annual review or your in-year finalisation review (if you have moved from tax credits to universal credit (UC)). This is usually 31 July after the tax year of your claim, or 31 January after the year of your claim if you sent in estimated income figures at the annual review stage but will vary if your tax credits award was in-year finalised due to moving to UC. The time limit could be longer if you are self-employed and have been waiting for a Self Assessment tax return to be finalised. If HMRC miss the deadline, they cannot start an enquiry on that tax year’s claim, but they may still be able to change your award up to five years later if your income tax liability is changed or if they can show the award was wrong and it was due to your own neglect or fraud.

There is no time limit for HMRC to complete an enquiry; it comes to an end when they send you a new decision for that tax year. You can, however, appeal to a tribunal asking them to instruct HMRC to stop the enquiry. They can do this if they decide that it is unreasonable for HMRC to continue. You should get advice about doing this.

Do HMRC have to give a reason for starting an enquiry?

HMRC do not have to have a reason for starting an enquiry and do not normally do so, although they may explain in their opening letter if they are checking a particular part of the claim to make it easier to understand what information they need. Some enquiry cases are picked at random.

What happens next (enquiry)?

The way HMRC carry out enquiries is similar to that for examinations.

At the end of the enquiry, HMRC may have found mistakes in your claim. They must write to you (and any partner) telling you the outcome of the enquiry. You can appeal this new decision. You may also have an overpayment to repay, as well as being charged a penalty.

What if I do not agree with the decision (enquiry)?

If HMRC change the award, they will also send you a new decision on your claim – a penalty may also be charged. You can appeal the new entitlement decision and the penalty decision if you think they are wrong. You can find out how to appeal in the appeals section.

Checks during the renewal period

During the renewal period, HMRC may decide to check your claim. This will be an examination, but it is slightly different from examinations that take place during the tax year. This is because, in order to allow your claim to continue after 5 April, HMRC continue payments. These are provisional payments until the renewal process is complete. HMRC can stop these payments at any time if they think there is something wrong with your claim; there is no right of appeal if HMRC decide not to pay you provisional payments. However, if you have completed your renewal pack (either online, by phone or by post), HMRC must make a formal decision on your claim for the tax year just ended and your claim for the current year – you can then appeal their decision.

Can I ask anyone to help me?

You can ask someone else to deal with HMRC on your behalf. This needs a signed authorisation from you giving the details of the person (or agency) you would like to act for you.

HMRC leaflets for information about examinations and enquiries:

WTC7 Tax credit penalties: what happens at the end of a check

This page gives a brief overview about checks on tax credit awards. For more information, visit the following pages and our website for advisers: