⚠️ Universal Credit (UC) is gradually replacing tax credits, and some other social security benefits. Universal credit is now available across the UK and HMRC state that it is no longer possible for anyone to make a brand-new claim for tax credits. Instead, people are expected to claim UC or pension credit if appropriate. Existing tax credit claimants can continue to renew their tax credits and/or add extra elements to their claim. See our tax credit page for more information. Our understanding is that existing tax credit claimants will move to either universal credit or pension credit. The move to UC is expected to be complete by the end of 2024. You can find out more about this in our universal credit section.

What income will be used to calculate my claim?

Tax credits are worked out using yearly rates and yearly income figures. We explain how disregards work, which year’s income is used, what to do if the estimate is wrong and what to do when your income changes. 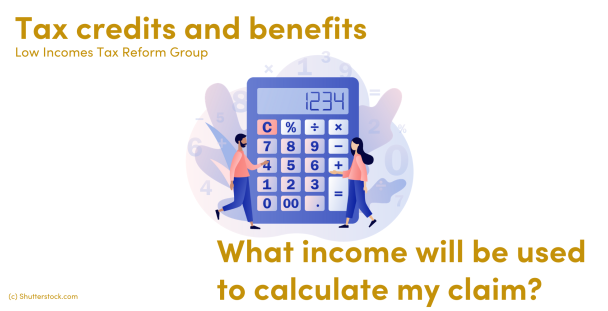 To find out more about what counts as income for tax credits see our income section.

How do the disregards work?

When you first claim – indeed for each year that you have a claim - you are asked for details of your household income for the previous tax year (in a joint claim, including that of your partner) and this is what your initial award is based on from the beginning of each tax year.

At the start of the year, your award will be based on your previous year income unless you tell HMRC during the tax year that you estimate your current year income will be different.

At the end of the tax year, HMRC ask you for details of the actual current year figures and they do a final comparison with your previous tax year income. This is how they work out exactly how much you are entitled to for the year and also whether you have been overpaid or underpaid.

Which year’s income is used?

When your tax credit award is renewed after 6 April, the initial award for the following year is once again based on your previous year income.

What happens if my estimate is wrong?

If you give HMRC an estimate of your current year income because you think it will be lower or higher than your previous year income, then you need to try and make sure the estimate is accurate, otherwise you may have an overpayment if it turns out to be too low.

The £2,500 disregard for income rises only applies when comparing current year (actual or estimate) to previous year income. It does not cover rises in estimated income. For example, if your previous year's income was £15,000 and you estimate your current year's income as £10,000 but it turns out that your income is actually £12,000 – the disregard will not cover the rise between £10,000 and £12,000.

Do I need to tell HMRC when my income changes?

In fact, by law you do not have to tell HMRC about any income changes in-year until your claim is being finalised after the end of the tax year. Because your annual income figure is used in working out your tax credit award, it can be difficult partway through the year to know if your annual income has changed significantly. For instance, you may get a small amount of overtime or reduce your hours temporarily and you cannot tell if and how much your annual income figure is going to be affected. However, if your income does change, you may carry on getting the wrong amount of tax credits if you delay telling HMRC. It is normally a good idea to report income changes as soon as possible. If you do contact HMRC when the changes occur, you reduce the risk of being overpaid or underpaid.

It is also worth bearing in mind that HMRC get information about earnings directly from employers who have to send them payroll information on or before each time they pay you (whether that is weekly, monthly, four weekly). HMRC sometimes use this employer data to adjust tax credit awards and to help finalise claims. If HMRC believe that your income might be higher than you have declared they may adjust your income figure to prevent an overpayment building up. However, if HMRC do this, they should let you know and you can challenge the figure if you disagree.

What if I have claimed universal credit?

The information on this page about whether to use previous year income or current year income (less the disregards) applies when your tax credits award is being finalised after you have claimed universal credit in the same tax year. However, different rules apply to how your income figure for either of the tax years is calculated. See our universal credit stopping tax credits section.

This page gives an overview of the income disregards for tax credits. For more detailed information, visit the following Understanding the disregards page on our website for advisers.