Who can make a claim for universal credit? 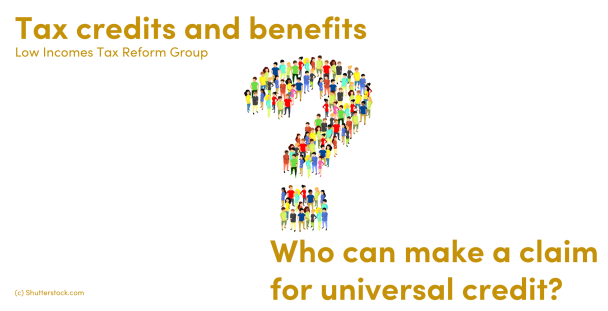 If I claim, will I receive a payment of universal credit?

This page explains who is eligible to claim UC. Even if you are eligible to claim, it does not mean you will be entitled to UC as you have to meet certain basic and financial conditions and then any amount you receive is based on your income, capital and circumstances.

To find out about the basic and financial conditions, visit our website for advisers.

Can I claim universal credit?

Universal credit is fully available in all parts of the UK, this means that most people are eligible to submit a claim for UC (although that does not mean they will be entitled to UC).

Can I still make a claim for tax credits?

Similarly, if you are renewing your tax credit claim, that doesn’t count as a brand new claim. Also, if you receive working tax credit which ends and you receive a four-week run-on payment, if you start work again or increase your working hours during that four-week period your entitlement to WTC should continue.

⚠️ Note: The legislation which gives effect to these rules about new tax credit claims is complicated. One interpretation of the current legislation is that some other people may be able to make new claims for tax credits. We have written some guidance for advisers on our specialist website which provides further information about this – however, it is extremely complex and should not be followed without speaking to a welfare rights specialist.

What if I am already claiming tax credits: when will I move to UC?

For the time being, existing tax credit claimants are not affected by the introduction of UC unless they have a change of circumstances that means they need to make a new claim, they need to claim other support which is now provided through UC rather than the other legacy benefits, for example help with housing costs or they choose to claim UC.

DWP and HMRC started testing the managed migration process (called ’Move to UC’) in July 2019. This test period was intended last until July 2020 but DWP suspended the pilot in March 2020 due to the impacts of the coronavirus outbreak in the UK. The pilot will re-start in 2022. The plans to complete the move have changed several times and the most recent planning suggests that the majority of other tax credit claimants will be moved to UC by the end of 2024.

It is expected that managed migration (‘Move to UC’) will involve DWP writing to existing tax credit claimants asking them to make a claim for UC by a certain deadline date. If they do not, the tax credit claim will end the day before the deadline date. Those who are moved to UC through this managed migration process may receive transitional protection if their UC award is less than the total of their legacy benefits at the point that they are moved over – which is the Government’s way of ensuring there are no cash losers at the point of change without a change of circumstances.

The only way you will move to UC before the managed migration exercise if: