During the coronavirus pandemic, some tuition providers moved their classes from face to face to online due to various restrictions. Other providers have been offering online tuition as a separate option for some time. This page explains the rules for tax credits and tax-free childcare. Other childcare schemes, such as universal credit, have different rules and so you must check the position carefully. 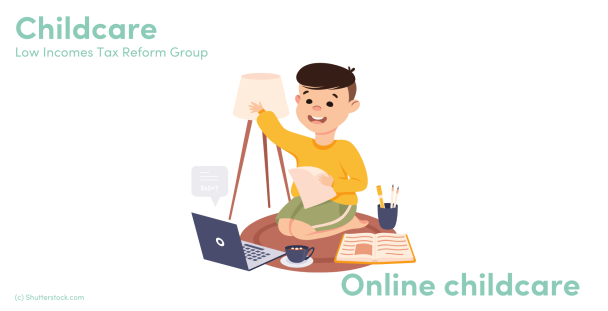 HMRC have confirmed to us that childcare that is tuition and provided wholly online is not qualifying childcare for tax credits. This means that the costs cannot be covered by the working tax credit childcare element even if the provider is registered. However, online tuition costs may be covered under the tax-free childcare scheme in certain circumstances explained below.

If you are currently claiming help from tax credits to pay for online childcare/tuition costs, or have done in the past, you should check the position carefully. If the tuition was delivered online for a limited period due to the coronavirus pandemic, those costs may have been covered under various COVID-concessions introduced to help claimants.

Can I use the childcare element of working tax credit to pay for face-to-face tuition?

If you meet the qualifying conditions and other usual rules of the childcare element, then as long as:

those costs will be qualifying childcare costs and can be included in your claim. Note, you cannot claim for any costs for compulsory education.

Can I use the childcare element of working tax credit to pay for online tuition?

Can I use the childcare element of working tax credit to pay for other online childcare?

Most of the cases we are aware of involve online tuition, however we understand that HMRC’s position is likely to apply to any online childcare where no face to face care is being provided.

I disagree with HMRC’s view about online childcare/tuition – what can I do?

then you can ask for a mandatory reconsideration of the decision they make about your award. This is the first step in the appeals process. If you still disagree with HMRC’s decision following the review, you can ask an independent tribunal to look at the decision. There are strict time limits for appeals.

The tax credit legislation does not specifically mention childcare provided online – it refers only to care being provided for a child. It is therefore open to a tax credit claimant to challenge HMRC’s interpretation of the law at a tribunal.

If you are in this position, you should seek advice from an experienced welfare rights adviser. Citizens Advice is a good place to start.

My child’s tuition provider changed to online tuition during the coronavirus pandemic – are those costs still covered by the childcare element of working tax credit?

HMRC’s view is that you cannot claim the childcare element to help with the costs of any online tuition even if the provider is registered.

However, from the start of the COVID-19 pandemic until 7 September 2020, HMRC operated a concession to help tax credit claimants whose children were not able to attend their usual childcare setting but who still had to pay the costs. From 8 September 2020, this concession was withdrawn because most childcare providers were able to re-open.

If you had a child who was getting face to face tuition from a registered provider and who could not attend that tuition setting due to the impacts of coronavirus, any costs you had to pay out during that period (7 March 2020 to 7 September 2020 inclusive) could still be covered by the childcare element of working tax credit, even though your child could not attend. Whether the provider was able to offer an online replacement is irrelevant for the purposes of the concession.

The following examples show how these rules worked.

Example: face-to-face tuition changes to online tuition due to coronavirus

Jason is a single parent who works 30 hours a week. His childcare costs are £150 a week, £50 of which is for a private after school club that provides additional maths and English tuition to his son. The tuition provider is OFSTED registered and the tuition is usually provided at a local centre. The centre closed at the end of March 2020 due to the coronavirus pandemic and re-opened on 16th October 2020. Between March and October the centre offered online tuition instead.

Jason can include the £50 a week in his childcare costs between the end of March 2020 and 8 September 2020 because his son was unable to attend his usual face to face childcare provision but he was still incurring the costs. This period is covered by the COVID-19 concession HMRC operated to help claimants. Between 8 September and 16 October 2020, Jason cannot include the £50 a week as part of his childcare costs for tax credits because the concession no longer applied and HMRC say online tuition is not qualifying childcare.

Seema is a single parent who works 30 hours a week. Her childcare costs were £180 a week which included £30 a week for additional maths and English tuition provided by a registered tuition provider at a local centre. In January 2020, Seema’s working hours changed and she was no longer able to drive her son to the centre. The centre also offered the same tuition online and so Seema moved her son to one-to-one online tuition from 10 January 2020. This part of her costs were still £30 a week. At the end of March 2020, the tuition provider’s centre closed due to coronavirus and all tuition was offered online.

Seema cannot include the £30 a week as part of her childcare costs for tax credits from 10 January 2020 because HMRC state that online tuition is not qualifying childcare. If Seema continued to include those costs with her tax credit claim, she will eventually have an overpayment of tax credits that will need to be paid back.

I have been claiming for online childcare – what do I need to do?

If you are claiming childcare costs from tax credits which include costs for online childcare/tuition then you should contact HMRC.

HMRC carry out checks of tax credit claims including the childcare element and may ask you for evidence of any childcare costs claimed. If they decide you have claimed for costs that are not qualifying costs, they may reduce your award and you may be asked to repay any overpayment.

I have an overpayment as I included online tuition costs in my claim. Is there anything I can do about this?

However, if you agree with HMRC’s decision or if a tribunal finds that HMRC’s view on online childcare/tuition costs is correct, then you may be left with an overpayment if you had already claimed for those costs.

You can dispute the recovery of the overpayment. HMRC have a dispute process which can be used if you have an overpayment but you think you should not have to pay it back. This is usually because HMRC have not met their responsibilities but you have, or HMRC have given incorrect advice. If you are successful at disputing an overpayment, it will be written off and you will not have to repay the money. HMRC deal with disputes internally.

You should include as much detail as possible in your dispute about why you included your online childcare/tuition costs and whether you checked any guidance or contacted HMRC. There is a time limit to dispute recovery of an overpayment which is three months from the date of the decision that gives rise to the overpayment.

However, whether a dispute in this situation will be successful will depend on the facts of your particular case. If it is not, then you can complain to HMRC and if you disagree with the outcome of that complaint then you can ask for it to be looked at again and eventually ask the Adjudicator to consider your complaint.

Can I use tax-free childcare to pay for online tuition?

Tax-Free Childcare (TFC) accounts can be used to pay for qualifying childcare which is defined as ‘any form of care or supervised activity for a child that is not provided in the course of the child’s compulsory education’. Our understanding is that HMRC accept online tuition can, depending on the circumstances, be a supervised activity for TFC purposes and therefore it may be possible to use that scheme to pay for online tuition.

However, the TFC rules state that payments can only be made for childcare where one of the main reasons is to enable the claimant to work. If the claimant needs to be present and supervising the child themselves during the online tuition, that may mean they are not working during those periods and HMRC may argue that enabling the claimant to work is not a main reason for the childcare. However, it will depend on the overall circumstances of each individual case as to whether the work test is met.

There are some examples of this ‘main reason’ test on the childcare choices website.

What about online childcare in other government childcare schemes?

Each benefit/scheme has its own rules and definitions of childcare. You should contact the department or authority who administers the scheme you use to find out if online childcare/tuition  can be included within the childcare costs that you claim.

The childcare element of universal credit (UC) has different rules to tax credits and TFC. It is similar to TFC in that it has a work requirement and costs can only be included if they are for childcare arrangements that enable the claimant to take up paid work or continue in paid work. UC claimants should contact DWP to ask if tuition costs, including online tuition costs, can be covered by the childcare element of UC.