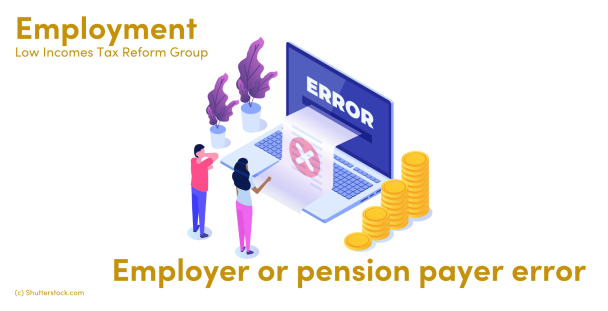 How should PAYE work correctly and how do mistakes happen?

The operation of PAYE is set out in law, together with each of the parties’ responsibilities. Information can pass between all three and sometimes the system breaks down.

The issue considered on this page is whether the employer or pension payer has failed to do something they are required to do by law – for example, not acting on instructions received from HMRC or not following the correct procedure when taking on a new employee or pensioner.

When PAYE works properly and a correct code is operated throughout the year, the tax paid should broadly equal the tax due. There can be small ‘rounding’ discrepancies of just a few pounds or pence but often these are ignored.

Those making payments under PAYE must follow the rules and deduct the right tax, based on those rules, before paying the net, after-tax, amount to the payee.

Mistakes can happen. Forms can get lost in the post (although now most exchanges between employers/pension providers and HMRC are electronic) and there can be breakdowns in communication.

It can be a very difficult task for you, when receiving an underpayment ‘P800’ calculation from HMRC, to work out why you have not paid enough tax.

Each of the three parties in the process could be at fault:

There could also be a far more serious situation where the employer or pension payer has not simply made an error, but they have been generally irresponsible in the way that they have operated PAYE or have deliberately not operated PAYE correctly.

What might my employer or pension payer have done wrong?

When you are checking the P800 calculation, you should bear in mind the types of errors that employers or pension payers do make:

What should I do if I think my employer or pension provider has made a mistake?

If you suspect that there has been some error by your employer or pension payer, either deliberately or perhaps by way of poor administration, you should contact HMRC.

You might think to ask your employer or pension payer what has gone wrong. However, we suggest instead that you ask HMRC to investigate, as they are in a much stronger and better position to do so.

When contacting HMRC, give details of what you think has gone wrong.

You might not understand the detail, but still feel something has gone wrong that is not your fault. In that case, we recommend you ask HMRC if they have considered whether your employer or pension payer is in any way at fault. If they do not feel that there has been any error on the employer or pension payer’s part, you should get HMRC to explain why the underpayment has arisen.

It is unlikely that you have will have received an adequate explanation on the P800 itself.

What will happen after I have contacted HMRC?

It is up to HMRC to review the situation and then tell you of their decision, which will be one of the following:

In the latter two situations, HMRC will need to issue a formal notice – a ‘Direction’ – to both you and your employer or pension payer that they think you should pay the tax. You then have a right to appeal in writing to HMRC within 30 days against their Direction, either by way of HMRC’s internal review system or an independent tribunal.

You should specify your grounds of appeal. Where the issue is whether the employer or pension payer took reasonable care and acted in good faith, you can appeal on the grounds that:

Where HMRC suggest that you received payment knowing that tax had not been deducted, your grounds of appeal can be that:

The Tribunal may set aside the Direction if they are persuaded that it should not have been made, or increase or reduce the amount of the underpayment shown in the Direction.

It is also possible that your tax underpayment has arisen for more than one reason – in which case, HMRC might consider that part of it is due to an employer or pension payer error, and part for other reasons. They could then treat each part of the tax bill differently – for example, agreeing to pursue your employer or pension payer for part of it and still asking you for the balance.

Key messages if you are confused or worried

The key point is that you make contact with HMRC either by telephone or in writing to raise your concerns over the calculation you have been issued.

When contacting HMRC, keep a note of your conversation and copies of any correspondence and papers sent to them, together with proof of postage.

As noted above, you do have rights and should not be afraid to exercise them.

See our getting help page if you need further support in dealing with HMRC.