⚠️ Universal Credit (UC) is gradually replacing tax credits, and some other social security benefits. Universal credit is now available across the UK and HMRC state that it is no longer possible for anyone to make a brand-new claim for tax credits. Instead, people are expected to claim UC or pension credit if appropriate. Existing tax credit claimants can continue to renew their tax credits and/or add extra elements to their claim. See our tax credit page for more information. Our understanding is that existing tax credit claimants will move to either universal credit or pension credit. The move to UC is expected to be complete by the end of 2024. You can find out more about this in our universal credit section.

How do I complain about tax credits?

Sometimes the only way to sort out any problems you are having with your tax credits claim is to make a formal complaint. We outline the various ways you can do this. 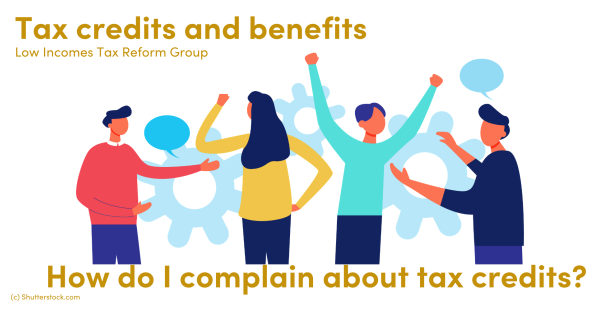 You may want to complain if, for example, the advice you have had from HM Revenue & Customs (HMRC) staff has been poor or misleading, mistakes have been made, there have been long delays, or you are just not happy with the service you have received.

A lot of tax credits complaints are about having to pay back an overpayment. There are other ways you can challenge a decision about an overpayment, such as by appealing or disputing.

Do HMRC have a code of conduct?

HMRC published a revised charter in November 2020 (The HMRC Charter), which sets out the standards of behaviour and values you should expect from HMRC staff. You can see the Charter in full on GOV.UK. This might be a useful starting point when writing your complaint letter, especially if you can show that HMRC have not met their promised standards.

What should I do if I want to complain?

Making a complaint is a formal process and has a number of stages.

You can ask to speak to a team leader or manager to start with; this can sometimes resolve the situation. If this does not resolve your problem then you will need to start the complaints process by sending HMRC a Tier 1 complaint (first review).

How do I make a formal complaint? (Tier 1/1st review complaint)

A formal letter of complaint should be sent to the Complaints Manager at HMRC, Tax Credits. You should write ‘Complaint’ at the top of the letter and make sure you keep a copy of your letter. This is your Tier 1 complaint (it might be referred to as a 'first review').

Although it is best to put your complaint in writing, you can ring the Tax Credit Helpline instead. If you do this, make sure you say you are making a formal complaint. You should also make a note of the date, time and details of your phone call in case you need to refer to it again.

You can also make a complaint to HMRC online via GOV.UK. Again, you should keep a copy of your complaint and make a note of the date and time that you send it.

Your complaint will be given to a caseworker to investigate. You should be given the name and contact details of your caseworker. They should also make attempts to keep in touch with you until your complaint is resolved or it moves on to the next stage.

HMRC say that most people should normally be contacted about their complaint within 15 days of them receiving it.

What happens if I am still not happy? (Tier 2/2nd review complaint)

If you are unhappy with the response from the caseworker, you can make a Tier 2 complaint by asking for a senior officer at the Customer Support Unit to review your complaint. Again, it is best to ask for this in writing, but it can be done by phone or online.

How do I make a complaint to the Adjudicator’s Office? (Tier 3 complaint)

If you are unhappy with HMRC’s final response, you can make a Tier 3 complaint by asking the Adjudicator’s Office to investigate your complaint.

You must contact the Adjudicator’s Office within six months of HMRC’s final response.

To make a complaint to the Adjudicator’s Office you should write to them including:

You can write to the Adjudicator at:

You can telephone them on 0300 057 1111. You can find more information on the Adjudicator’s Office website.

Can I refer my complaint to the Parliamentary Ombudsman?

In most cases, you can only make a complaint to the Parliamentary Ombudsman once you have had a response about your complaint from the Adjudicator’s Office.

You cannot go directly to them yourself; you must ask your MP to make the complaint on your behalf. There are rules about the timescales relating to the Ombudsman which say that the complaint must be made to the MP not later than 12 months from the day on which the person complaining first had notice of the matters alleged in the complaint, but the Ombudsman may still look into the complaint made outside that period if they consider that there are special circumstances which make it proper to do so.

You can download a form from the Parliamentary Ombudsman website that may be used to send complaints to your MP.

What can I expect as a result of a complaint?

Any of the following outcomes could apply in your case:

This page gives a brief overview of the complaints process for tax credits. For more detailed information visit our website for advisers and the following pages:

Tax Credits: making a complaint to HMRC about your tax credit claim on our website for advisers.

More information about the Tax Credits Office's complaints procedures on the HMRC website.