⚠️ Universal Credit (UC) is gradually replacing tax credits, and some other social security benefits. Universal credit is now available across the UK and HMRC state that it is no longer possible for anyone to make a brand-new claim for tax credits. Instead, people are expected to claim UC (or pension credit if appropriate). Until they start to claim UC, existing tax credit claimants can continue to renew their tax credits and/or add extra elements to their claim. See our tax credit page for more information. Existing tax credit claimants (under state pension age or in a mixed age couple) are expected to be moved across to universal credit by the end of 2024. You can find out more about this in our universal credit section.

What can I do if I have an underpayment? 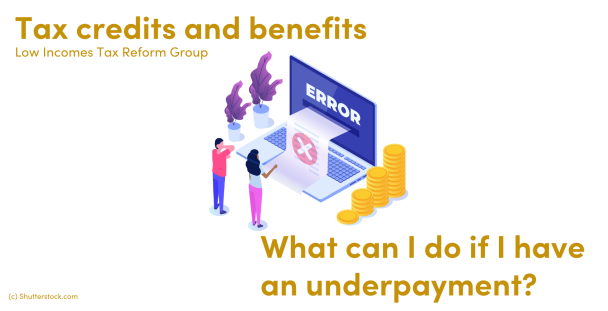 How do underpayments happen?

Tax credits are worked out using yearly rates and yearly income figures, and then paid in weekly or four-weekly instalments during the tax year (6 April in one year until 5 April the next year).

Does my income make a difference?

Underpayments often arise because of reduced income. The income figure used to work out the amount of tax credits you get is your annual income figure for the tax year (from 6 April to the following 5 April). The initial decision about your award is based on your income from the previous year and then later compared to your income in the year of your award, so if there is a difference over or under a certain amount, it will affect the amount of tax credits you are entitled to in that year.

You can find out which income figure will be used to calculate your award in our disregards section.

Income changes do not actually need to be reported until the end of the tax year, but if you do keep HMRC up to date about any income changes, your tax credits may also be adjusted at the same time. So, if you think your income (and that of any partner) for this tax year is likely to be at least £2,500 less than your previous tax year’s income, it is possible you might be being underpaid. If you tell HMRC about this during the tax year, the amount you get for the rest of the year may go up.

How will I get my underpayment paid?

If you do not tell HMRC about your income going down until the end of the tax year, when your claim is being renewed, you should be paid any underpayment as a lump sum at that stage. If you are waiting for an appeal to be heard, HMRC might hold on to the underpaid money until the appeal has been decided.

If you are in receipt of other benefits, you get advice about reporting income changes for tax credits.

If you start to claim UC and HMRC decide you have been underpaid tax credits when they in-year finalise your tax credits award, then any underpayment of tax credits which HMRC pay to you should be disregarded as capital for UC purposes for the first 12 months.

The page gives a brief overview of tax credit underpayments. For more information, visit the following pages and our website for advisers: