If HM Revenue & Customs (HMRC) have delayed using information in their possession, and this results in you not paying enough tax, HMRC will sometimes write off the arrears of tax under Extra-Statutory Concession (ESC) A19. This guidance is to help you consider whether you can challenge HMRC under this policy. 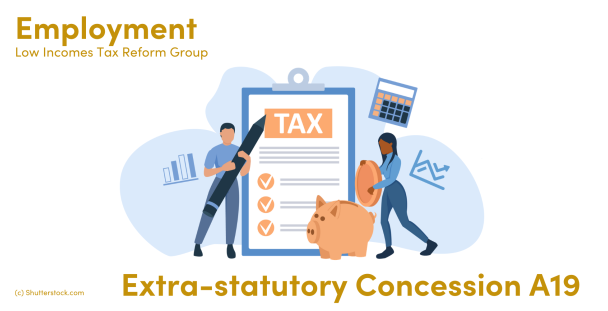 Extra-Statutory Concession A19 (ESC A19) is HMRC’s practice covering situations where an error or administrative failure of theirs resulted in someone paying too little income tax or capital gains tax.

It was devised to ensure fairness for taxpayers where the strict law says that they owe tax but HMRC agree that it would be unfair to pursue payment.

ESC A19 allows HMRC to write off, that is, not collect, tax in certain circumstances.

It is generally easy enough to work out whether the factual conditions of ESC A19 are satisfied. Arrears of tax must have arisen because HMRC have delayed in using information about you which they have had in their possession, and the arrears must usually be at least one year old. Sometimes, the concession can be used to write off arrears which are less than a year old where HMRC’s failure to make use of information has been persistent.

The other element of the test is less easy to satisfy: whether HMRC write off the tax depends on whether they think it was reasonable for you to have believed your tax affairs were in order – see What is the reasonable belief test? below.

So when might you be justified in asking for your tax to be written off under ESC A19?

First, bear in mind that ESC A19 usually only applies to underpayments for tax years ending more than 12 months ago – for example, you cannot normally use ESC A19 to ask for tax owing for 2021/22 to be written off if HMRC are advising you of the underpayment in, say, June 2022.

However, if HMRC have persistently got something wrong year after year, they may consider writing the tax off for all years up to and including 2021/22 unless they corrected the error before the end of the 2021/22 tax year. So if you underpaid tax in earlier tax years, and an underpayment in 2021/22 occurred for the same reasons, ESC A19 might apply.

What is the ‘reasonable belief’ test for ESC A19?

Importantly, this reasonable belief test should be applied by looking at you as an individual. HMRC’s internal guidance requires their staff to consider the following factors when applying the reasonableness test:

So what factors should be considered? Drawing on the criteria set out in the HMRC official manual, some examples might be:

What should I do if I think ESC A19 should apply?

If you think your situation fits in with the concession, contact HMRC as soon as possible – their telephone number and address should be given on the tax calculation you have received.

If you think HMRC have made mistakes and you have evidence to support that, set out the details in your letter or when you telephone. Whenever you contact HMRC, keep a record.

If writing, mark your letter as claiming ESC A19.

We also suggest when you contact HMRC that you ask them to suspend any action to collect the tax they say you owe while they review your case.

What happens after I have contact HMRC asking them to apply ESC A19?

HMRC will, in due course, come back to you with their decision. There are several possibilities:

If they decline ESC A19 or only allow it in part, you have other options to get your case reviewed further. First, you can submit a formal complaint asking to have your case reviewed again, giving details of why you feel you have received inadequate help and care from HMRC. Read our separate complaints guidance.

The only route to the courts in ESC A19 cases is to seek what is called a ‘Judicial Review’, but unfortunately this is beyond the means of most ordinary taxpayers, particularly as it carries with it the downside of HMRC potentially seeking to recover their costs from you should your case fail. If you do wish to consider this route, you would need to take advice and act quickly as there are strict time limits to request the review which apply from the date of HMRC’s decision. There is a very useful basic guide to the judicial review procedure on the website of the Public Law Project.

Should I pay the P800 bill while I am waiting to hear back from HMRC about ESC A19?

HMRC should agree to suspend collection of any arrears while they consider a claim for relief under ESC A19.

If you pay the amount HMRC ask for, HMRC may claim that there are no longer any arrears in respect of which ESC A19 can apply, and refuse to consider the concession.

What is the full text of Extra-statutory Concession A19?

The full text of the concession is as follows:

“A19. Giving up tax where there are Revenue delays in using information

Arrears of income tax or capital gains tax may be given up if they result from HMRC’s failure to make proper and timely use of information supplied by:

Tax will normally be given up only where the taxpayer:

In exceptional circumstances arrears of tax notified 12 months or less after the end of the relevant tax year may be given up if HMRC:

Where can I find HMRC’s guidance on ESC A19?

HMRC’s guidance to individuals on GOV.UK.

HMRC’s internal staff guidance can be found in their procedural manuals.