How do I complain to HMRC?

If you disagree with a decision that HMRC have made, you may be able to make an appeal. 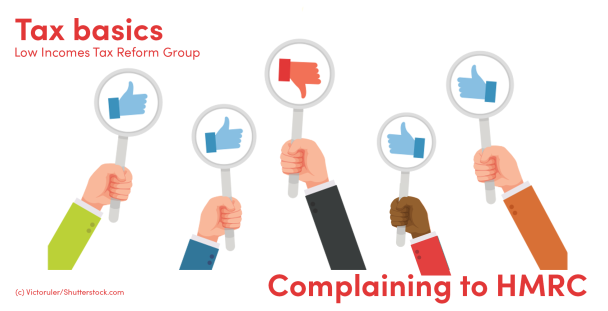 What are my rights and responsibilities in connection with tax?

HMRC expect you to be honest, to take care to get your tax right and to show their staff respect.

Equally, you can expect HMRC to show you respect, to help and support you with your tax, to treat you as honest and even-handedly. They must protect your information and respect your privacy.

HMRC published a new charter in November 2020 and this provides more detail on the standards and behaviour HMRC should be aspiring to when dealing with people and businesses using their services. You can find the HMRC Charter on GOV.UK.

When can I complain?

Most people do not like to complain, but if you are not happy with the way that HMRC are dealing with you then you should understand what you can do about it.

There are many things that may form the basis for a complaint. Do you think you:

Being denied the right amounts of money or the right benefits may be a case for making an appeal. But sometimes you may not receive what you are entitled to because of delay or an administrative problem. If that is the case, a complaint is usually the right remedy.

If you are making a complaint, we suggest that you review the undertakings given by the HMRC Charter to see if any have been broken and can be referred to in the complaint.

How do I make a complaint?

To make a complaint, you should write to or telephone the HMRC office that you have been dealing with. Contact details are available on GOV.UK, with links to online forms. You can use these to make a complaint if you have set up an online tax account, rather than sending a letter through the post.

You should tell HMRC that you are unhappy and wish to complain.

If you write a letter, put ‘complaint’ on the envelope and at the top of the letter. If part or all of your complaint is due to discrimination, make that clear at the outset. This should ensure that your letter is passed directly to HMRC's complaints section.

What information should I provide to HMRC?

To be able to help with your complaint quickly, HMRC will need to know your full name, your National Insurance number and/or your Unique Taxpayer Reference for Self Assessment, your address and the last reference number that they used when contacting you. A telephone number where and when they might contact you would also be helpful.

Set out in the complaint what has gone wrong, when it happened, who you dealt with and what effect it has had on you. You should also set down what you want to see done to put it right. If the reason for your complaint is causing you hardship or distress, then tell HMRC.

What response can I expect from HMRC?

HMRC should respond quickly. If you do not hear from HMRC within four weeks, then chase them. If they delay in responding to your complaint, you may be able to make a claim for compensation later.

If it is not possible to give a full reply within a reasonable time, HMRC should provide an interim response with information on the action they are taking. They should tell you when you can expect a full response.

Their full reply should include details of who you can contact if you feel the complaint is not dealt with in a proper manner.

If you prefer not to deal with the same people you have been dealing with before, or have tried that and you are still unhappy, then you can ask for your complaint to be passed straight to a complaints handler. You can do this whether you are making your complaint in writing or by telephone.

Note that if you complain of serious misconduct by an HMRC staff member, this should be treated very seriously. Further information is provided on GOV.UK.

What can I do if my complaint is not resolved to my satisfaction?

If you are unhappy with the response to your complaint, you can escalate your problem by once again addressing your letter as a complaint, but asking for the letter to be passed to a different complaints handler and for them to review the complaint again.

You should expect a response within four weeks, after which time you should chase them if necessary. This is the final point of HMRC’s internal complaints procedure.

When do I go to the Adjudicator and the Ombudsman?

If you are still unhappy after the HMRC complaints procedure has reached its conclusion, you can ask the Adjudicator to look into your complaint.

You may contact the Parliamentary and Health Service Ombudsman, who investigates cases where bad administration by any government department has led to an injustice that has not been remedied.

The Ombudsman does not normally look at cases until they have been through the Adjudicator.

You cannot contact the Ombudsman directly. You must ask your MP to do this for you. You can find your MP using the search function on the UK Parliament website. The Ombudsman's office will apply its selection process to decide which cases to investigate.

The Ombudsman is entirely independent and can also consider complaints about the Adjudicators Office, but will not normally select a case for investigation if the Adjudicator appears to have taken account of everything relevant.

If you are not resident in the UK and therefore do not have a current MP, it is still possible to complain. The Parliament website provides information on how to find out which MP you should contact.

Do I have to pay my tax bill while HMRC are considering my complaint?

If you have an outstanding tax bill, you should still pay it whilst HMRC are looking into your complaint, otherwise you could be charged interest and possibly penalties.

If you pay too much and are due a repayment, HMRC will pay you the repayment and may also pay you interest on the overpaid tax from a set date.

How will HMRC resolve my complaint?

When you complain, HMRC will hopefully resolve your complaint to your satisfaction.

When you complain, you should ask for reimbursement of your expenses, for example, postage, phone calls and professional fees. You should also ask for compensation if you have been caused worry, distress or unreasonable delays.

What is Extra Statutory Concession A19?

If HMRC have not used information they had in their possession and are therefore late in asking you for money that is owed, they will not always seek the full amount that is due. For example, if you told them that you were now receiving a state pension, but they did not take any action to collect the tax due for two years, you may not have to pay the tax you owe.

This will only apply if you could reasonably have believed that you did not owe HMRC any more money. If you think this might apply to you then you should tell HMRC.

If you have any doubts, we suggest you read our guide on ESC A19, which covers the position in more detail. You can find a booklet containing all of HMRC's extra statutory concessions including A19 on GOV.UK.

If you have a tax adviser or can afford to pay for one, you should take advice from them on your course of action. HMRC may agree to compensate you for some of the costs you incur in using a tax adviser, depending on the outcome of your complaint.

You might also be able to get some help from Citizens Advice or the separate tax charities, TaxAid or Tax Help for Older People – see Getting help.

Can I claim reimbursement of my costs?

You may be able to make a claim for costs you have incurred in trying to get things sorted out.

You can do this at any time while HMRC are looking at your complaint, or if you can tell them about your costs when you first make your complaint they may be able to process the claim quicker.

You may be asked for receipts or invoices to support your claim.

You cannot be compensated for your own time spent in sorting things out unless you can show that you have lost earnings as a direct result. You may, however, be able to reclaim the costs of a tax adviser.

You can see an example of how this works in Jo 1.

Can I claim compensation for worry, distress or extra delay?

Mistakes and delays may cause you a great deal of worry or distress. HMRC say they realise how upsetting this can be.

If you have suffered worry or distress because of HMRC’s treatment of you, you should let them know. They may be able to pay you an amount to recognise your particular circumstances and so apologise for the way they have treated you.

HMRC do not intend for these payments to put a value on the distress you have suffered, but that does not mean that you should hold back from asking for substantial compensation where merited, for example if HMRC's actions have made you unwell.

Examples of the amounts HMRC should be prepared to pay can be found in the histories set out in annual report by the Adjudicator. You can find these reports on the Adjudicator's website.

If HMRC handle your complaint badly, they may pay you a further sum. For example, if you sent them a reminder and there was a further delay in their response.

All such compensatory payments are tax free and you do not need to declare them for tax purposes or show them on your tax return.

You can see an example of how this works in Jo 2.

Jo 1: claim for costs in connection with complaint

HMRC made a mistake with Jo's tax. The matter took a long time to resolve and several letters and two long telephone calls lasting over an hour at Jo's expense. In the end Jo lodged a complaint regarding the excessive delay. The delay meant that Jo had to pay too much tax and she incurred bank overdraft charges as a result of overpaying her tax.

Jo kept details of all the letters she sent and receipts from the local post office for the cost of postage. She lodged a claim with HMRC for the amounts she paid and sent copies of all the receipts together with the relevant telephone bills and bank statements to support this.

Jo 2: claim for compensation for delay and distress

Jo was very unhappy at the way she had been forced to send several letters and make telephone calls lasting over two hours before her problem could be resolved. She decided that she had a case for compensation for both worry and distress and additionally for further amounts because of the long wait before the tax was repaid.

She wrote to HMRC claiming both types of compensation. In the circumstances it was decided that Jo's argument was valid and a compensation cheque was issued to her.

What if my complaint is about tax credits?

The complaints process for tax credits is similar to that set out on this page for tax.

How do I complain about tax credits?