On this page we briefly explain what devolution is. We also explain which tax powers are devolved in each of Scotland, Wales and Northern Ireland. 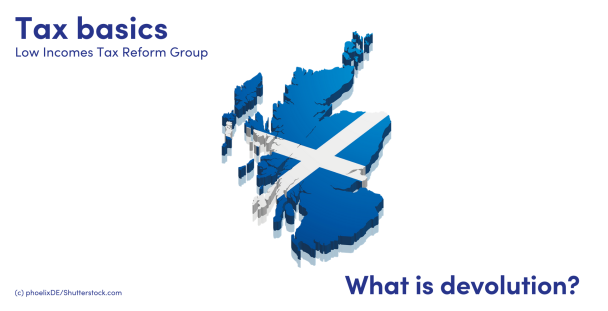 The UK parliament remains sovereign in law and still legislates for Scotland, Wales and Northern Ireland. By convention, it does not do so for devolved matters without the consent of the relevant parliament or assembly.

On this page we look at devolved taxes and future proposals.

Which taxes are devolved in Scotland?

Powers over local taxation rest with Scotland – in particular, this means that decisions about council tax and non-domestic (business) rates for Scotland are made in Scotland. These taxes are administered and collected by local councils.

Revenue Scotland is responsible for the collection and administration of these two devolved taxes and has published its Charter of Standards and Values. You can find out more information about the Scottish tax authority on the Revenue Scotland website.

Air passenger duty is due to be fully devolved to Scotland and replaced by air departure tax, but this is on hold.

Aggregates levy is due to be devolved to Scotland.

Which taxes are devolved in Wales?

Following the Silk Commission and the Wales Act 2014, some tax powers are being devolved to the Welsh Assembly. Since April 2018 there has been a fully devolved Welsh land transaction tax and a fully devolved Welsh landfill disposals tax; these replaced stamp duty land tax and landfill tax on transactions taking place in Wales. The Welsh government has set up the Welsh Revenue Authority (WRA) to administer these devolved taxes and it has published its Charter for joint values, behaviours and standards.

The Welsh Assembly can already pass laws in respect of non-domestic rates (business rates) and council tax – these are classed as local taxation, rather than devolved taxes.

Which taxes are devolved in Northern Ireland?

There is more information about devolution on GOV.UK.

Introduction to the tax system

What is Scottish income tax?

Do I have to pay Scottish income tax?