This page looks at some complications which arise with the high income child benefit charge (HICBC) when a relationship ends. 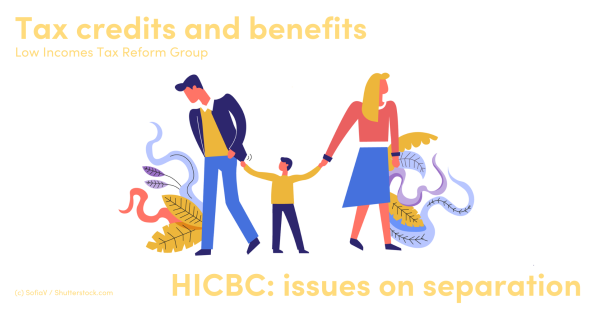 What counts as a ‘partner’ for HICBC purposes?

Two people who are married to each other are treated as ‘partners’ for the HICBC if they are not separated under a court order or separated in circumstances likely to be permanent.

However, you can also be treated as a ‘partner’ of someone else for the purposes of the charge if you are living together as if you are married.

In most cases, it is usually clear whether or not someone is treated as your partner under either of these tests. But determining when someone becomes your ‘partner’ – and when that person may stop being your ‘partner’, can be tricky.

What if I am not married to my partner?

There is no legal definition. This means you have to look at lots of factors, including:

If you are not married but you are living together with your partner, then you need to determine precisely when your relationship changes to be of a more permanent nature. In other words, you must work out when it would start to be described in terms consistent with that of a married couple.

This can be very problematic, not least because each partner may have different views on the point (and so may HMRC or the courts), but also because it must be assessed on a weekly basis to determine your liability to the HICBC.

On a practical level, if you are living together with someone you would describe as your partner, you might consider your ‘partnership’ for HICBC purposes to commence from the point you move in together and end if and when you then later move out and no longer live in the same household. However, the period may be shorter than that – for example, if you separate but you continue to live under the same roof for financial or practical reasons.

Remember that the test is whether or not you are living together as a married couple. This means that if you are not married and you are not living together, then another person cannot be treated as your partner for HICBC purposes – whatever the nature of your relationship.

When am I treated as separated from my spouse?

Again, this is depends on the facts and circumstances of the case. There is no legal test and the two parties to the relationship, HMRC and the courts may all have a different view.

Practically, you would usually be separated in such circumstances if, as a couple, you both agreed that you were not going to get back together. Where you are not in agreement, HMRC or the courts will need to resort to looking at the available evidence such as whether (or when) one party moved out of the marital home and whether that was a permanent or temporary move. These issues were considered in a 2020 court case, Manku v HMRC [2020] UKFTT 308 (TC).

When do I stop being liable to the HICBC if I separate from my partner?

This can be confusing, because the HICBC is always assessed based on your annual income – even though you may have only had a partner who claimed child benefit for part of the year.

First, you need to work out the date of separation for HICBC purposes (see the above two questions).

Then, in calculating the charge, you need to add up all of the child benefit received by your former partner in respect of the weeks in the tax year you were together – up to and including the week of separation. Note that child benefit is normally paid four-weekly, so you would likely need to include part of a 4-weekly payment. A four-weekly payment is paid in respect of the week of payment and the previous three weeks.

Karl and Gemma were married, but they separated on 5 October 2021. Karl’s annual adjusted net income is £55,000 a year; Gemma’s is £25,000. Gemma claims child benefit in respect of their two children and she continues to do so after the separation. The children live with Gemma.

Note: The HICBC may become payable quite some time after the separation. In this example, unless the charge was collected in-year via PAYE, the HICBC would be due as part of Karl’s 2021/22 Self Assessment balancing payment on 31 January 2023 – some 16 months later. You may wish to bear this in mind if you are agreeing a financial settlement as part of the separation.

I opted out of child benefit payments. Can I backdate the payments after separating?

If, as a couple, you are affected by the HICBC then you may choose to opt out of receiving child benefit payments by completing an online form. You may do this for a number of reasons – for example, in order to avoid the partner with the higher adjusted income having to file a Self Assessment tax return (though they may have to file one in any case), or to avoid the hassle of claiming child benefit only to pay back most or all of it through the HICBC.

Opting out of payments, as opposed to ending the claim altogether, is an important difference as the child benefit claimant would then continue to be entitled to National Insurance credits. This may help them build up entitlement to a UK state pension if they were not entitled to a qualifying year towards their state pension for any other reason.

Once you have opted out, you can restart your child benefit payments – for example, after separating from a higher-income partner who would have been liable to the HICBC.

In certain circumstances, it is possible to backdate the payments for up two tax years. However, strictly speaking the law allows you to do this in the case only where no HICBC would have been payable.

You cannot, therefore, backdate payments after separation if in so doing you would trigger the HICBC on your former partner!

What happens if I receive contributions towards the upkeep of my child from my ex-partner?

The HICBC to you (or your partner) in this situation if:

It is therefore not possible to avoid the charge by having your ex-partner claim child benefit and pay you the money.

However, if the child is only living with you for a temporary period (no more than 52 weeks) and they live with the claimant immediately before and after that period, then the child benefit claimed in that period is ignored for this purpose.

This means, for example, that in shared custody arrangements where your ex-partner claims child benefit and your child lives with you for only part of the year, liability for the HICBC in respect of that claim would not normally transfer to you.

Polly is 8. She normally lives with her dad, Jamie. In April, Jamie finds out that his mother is terminally ill so he goes to live with and care for her from 1 May until her death in October. Polly moves in with her mum, Sienna, while Jamie is away. Jamie claims child benefit throughout and gives money each month to Sienna for Polly. Polly returns to live with Jamie in late October.

Sienna earns £55,000 a year. In this situation, even though Sienna is potentially in scope of the HICBC, she does not have to pay the charge as:

If Jamie had been away caring for his mother for more than a year, Sienna might have become liable to the HICBC.

What happens if I get back together with my partner?

First, if you get back together with your partner you should ask whether or not you ever separated for the purposes of the HICBC. If you were married (and perhaps remained so), then it would be necessary for you to have been separated in circumstances likely to be permanent. Therefore, to get back together after this would, by definition, be unlikely. Nevertheless, it is possible, depending on the facts of the case (in fact, this is exactly what happened in the case of Manku v HMRC [2020] UKFTT 308 (TC)).

If you were never married, remember that living together is a requirement for being treated as partners for HICBC purposes. So, if you moved out, you would need to move back in together and then ask yourselves at what point did you recommence living together as a married couple. This is the point from which the child benefit payments would be clawed back via the HICBC.

If you’re interested in the issues which the definition of a ‘partner’ causes in the UK tax system more widely, you may wish to read our 2015 report Couples in the tax and related welfare systems – a call for greater clarity.

If you have a change of circumstances relating to your child benefit claim, you should contact the Child Benefit office.