Received a letter from HMRC saying you might be involved in tax avoidance and don’t know what it means? In this article we help you understand it

Some non-compliant umbrella companies pay workers part of their wages in the form of non-taxable loans, grants, advances etc. If you have received a letter headed ‘We think you may have been involved in tax avoidance’ from HMRC, you may be working for one of these umbrella companies and you need to take action. You may not have realised that this was happening, but this is likely to be ‘disguised remuneration’ (DR).

You may have found the letter alarming, but HMRC want to let you know as early as possible, where they believe that you are involved in a tax avoidance scheme. This is so you can get out of the scheme before the problem grows.

This is part of HMRC’s work to try and clamp down on the problem of DR. For example, HMRC have also been trying to warn people about DR in their Spotlight series on GOV.UK (for example ‘Spotlight 45: Umbrella companies offering to increase your take home pay’), however you may not have seen these Spotlight publications or recognised that they were relevant to you.

Here we tell you more about the DR problem and what it means for you. 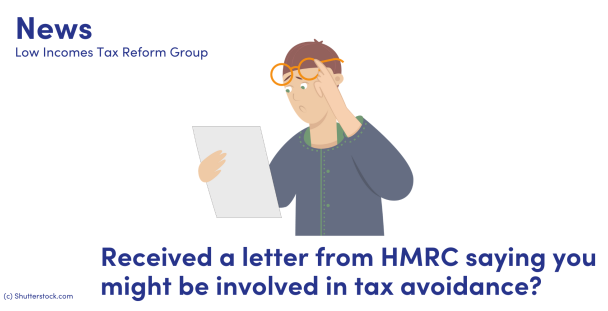 What is disguised remuneration?

Disguised remuneration (DR) is when a worker receives some of their wages as a non-taxable element. DR can cause huge problems for workers and seems to be a particular issue for those using umbrella companies. Umbrella companies are unregulated and there is a wide spectrum of operators. Most umbrella companies are compliant and don’t get involved in DR schemes, but some do (and some have been specifically set up for this purpose).

Illustration to show a typical DR supply chain by LITRG

As explained in a previous news article, previously, DR schemes may have been ‘sold’ to umbrella company workers as a way of them increasing their take home pay (although they may not have fully understood what they were getting into). But DR schemes can have advantages for others in the supply chain, and this is probably why we have now started to see umbrella companies paying workers through DR schemes without the worker having any knowledge of it whatsoever.

How does it work?

Traditional, compliant, umbrella companies pay out the vast majority of the income they receive in from agencies or end clients, in the form of worker salaries and ‘on top’ employment costs (such as employers’ national insurance), with the company retaining a small ‘margin’ for its services.

Suppose Jess’ umbrella company above continues to receive £495.25 as per the agreed contract rate, but instead of using this to deliver an £11 an hour gross pay rate to Jess and take a £26 fee, it only delivers a gross salary rate of £8.91 per hour to Jess (the main minimum wage rate in May 2021) and no taxable bonus.

Thus, through using a loan arrangement, the umbrella company has made £70.57 rather than its usual £26. Jess is no better off then she would have otherwise been if she had simply received a gross pay of £385.

By using a DR scheme, the umbrella company can increase its profitability very easily and/or pass this money to others in the supply chain to secure future business.

What does HMRC’s letter mean?

You may not have realised that you were being paid through a DR scheme if all you do each week is check that your net pay looks roughly the amount you were expecting. In most cases, and as we showed in the Jess example above, you may not benefit at all or you may only benefit by a small, probably unnoticeable amount, if your umbrella company pays you using DR.

But DR is a serious issue, and now that you have received this letter from HMRC, you need to check if there is a problem in the way that you are being paid.

First, you should check all documents relating to your employment arrangements. You should look for anything that suggests you are paid in payments that are ‘not taxable’ or that are not treated as earnings (for example, loans, grants, annuities, shares, advances, credit or other payments).

Then you should think about your payslips. Although you may not have received payslips at all, if you did (and you can access them), they may show that you only received the minimum wage, they may show a different ‘net’ amount to what you received in your bank account or they may show a lower gross pay for tax amount than net pay amount (as per Jess’ DR payslip above)

You should also check your bank statements and see if you received more than one payment into your bank account – in Jess’s example, she received an amount of £274.87 (the normal taxed amount) and then the £46.81 ‘top up’ amount separately, although this might not always happen.

You should also check other sources for information or clues as to their pay practices – for example you could check the umbrella’s website or social media, look up other websites (sites like Contractor UK have forums where people post useful information and warnings about DR schemes) and look for news and/or recent events about the umbrella company.

If you are still not sure if you are involved in DR, you could seek help from a professional adviser, or if you are on a low income, TaxAid.

What should I do next?

If you think your umbrella company may have been paying you using a DR scheme, you could try asking them about it, but, if they have, the likelihood is that they may deny all knowledge or try to explain it away and reassure you it is allowed.

You may wish to leave the umbrella company concerned with immediate effect and find a different umbrella company to work through. (Obviously, this may be easier said than done if the ‘umbrella comes with the job’ and you cannot easily find another job.)

If your compliant new umbrella company changes hands or gets taken over, you need to be extra vigilant about your pay and taxes so that you don’t find yourself in the same situation again (we have heard of problems with a compliant umbrella being taken over by one running a DR scheme behind the scenes, which the workers were put into unknowingly).

An indication that this may have happened is if your employer’s name or PAYE reference number changes (your PAYE reference number looks something like this 123/A1234 and is usually shown on your payslip). This can also be an indication that you are in a mini umbrella company model, which you should also be on the look-out for. In extreme cases, this changing of employers can happen repeatedly.

If you found your work through an agency, who, in turn, pointed you towards the particular umbrella company to work through, you should inform them of your situation. Some agencies are incentivised by a commission into encouraging workers to join up to certain umbrella companies. It is important that they know if the umbrella company they are pointing workers to is operating disguised remuneration. If you are not happy with the way your agency deals with the situation, then you should complain to any trade body that they belong to (for example the REC or APSCO) or the Employment Agency Standards Inspectorate.

You should warn any friends or colleagues that may also be working through an umbrella company about what has happened to you and encourage them to self-check their positions.

You should check your National Insurance (NIC) record in case the amount of salary that has been processed properly by the umbrella company isn’t enough get any contributions attached to your NIC record, meaning there could be a gap in your NIC record.

Will I have to pay anything to HMRC?

Being paid through a DR scheme means that you will not have paid enough tax on your total earnings. Depending on how long you have been in the scheme, a significant underpayment may have built up.

HMRC’s letter may suggest that it is you that could end up having to pay this back. However, while there is, indeed, a concept in UK tax law, that people are responsible for their own tax affairs, this is not generally the case where they are employed and have their income tax collected via the PAYE system by their employer.

What underlies a DR scheme is a failure to operate PAYE correctly on behalf of the umbrella company employer. In law, the PAYE Regulations say that HMRC can collect tax underpayments from the employer under Regulation 80 – this is effectively a means of enforcing the payment of PAYE and says that the employer will remain liable for the tax that should previously have been accounted for to HMRC but for whatever reason was not paid.

There is an alternative route open to HMRC to transfer liability to the employee under Regulation 72. However, use of Regulation 72 is restricted to cases satisfying either of the two conditions:

1. That the employer took reasonable care to comply with the PAYE Regulations and its error was made in good faith; or
2. That the employee had received relevant payments knowing that the employer wilfully failed to deduct the amount of tax that should have been deducted from those payments.

Finally, under Regulation 81, the employee can also be directed to pay the liability where the employer cannot pay the amount from the Regulation 80 determination (because for example they are insolvent or have ceased trading) but only where one of two conditions is met, as set out in HMRC’s guidance.

For those with a technical interest in the law, the relevant regulations, can be found here.

HMRC have assured us that these letters to workers are complementary to the work they are doing at employer level in respect of the underpaid PAYE. This means that we wouldn’t expect to see workers being chased for any underpaid PAYE without HMRC first trying to engage with the employer.

Indeed, HMRC’s own internal guidance requires them to look first for ‘employer error’ and it is worth quoting the following passage if necessary: PAYE90020 – Reconcile individual: underpayments: PAYE directions ‘If an employer fails to deduct the correct amount of PAYE from an employee’s earnings, the employer is liable for the amount under-deducted. The underpayment should be recovered from the employer not the taxpayer, unless HMRC makes a PAYE direction.’

If you need help dealing with HMRC on this issue, you should seek assistance from a professional adviser, or if you are on a low income, TaxAid.

LITRG has recently released a research report entitled ‘Labour Market Intermediaries: a technical report outlining how umbrella companies and other intermediaries operate in the labour market and the implications for workers who use them’.

The report contains a detailed discussion of DR arrangements, in which umbrella company contractors and agency workers may become entangled.

Although we can’t provide individual advice, if you have been involved in DR inadvertently, we would be interested to hear of your experiences. We can feed this into our discussions with HMRC about their strategy for DR and also into our future work in this area.