The curious case of ‘worker’ status and Statutory Sick Pay

The Supreme Court has recently found some Uber drivers were ‘workers’ rather than ‘self-employed’ for employment law purposes. In this article we explain what this means and also look at why headlines such as ‘Supreme Court's decision means drivers should be considered as workers entitled to holiday and sick pay and the minimum wage’ are incorrect. 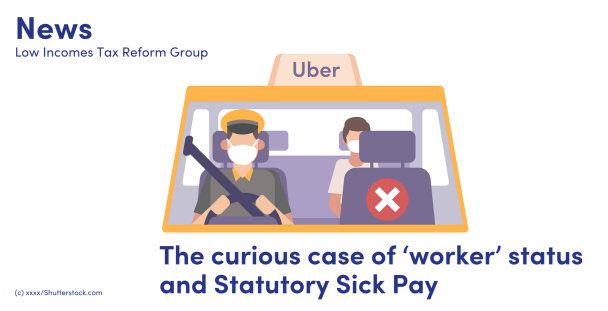 What is ‘worker’ status?

A ‘worker’ in employment law terms, is basically someone who provides work or a service as part of someone else’s business. For example, an electrician working for a single building contractor as opposed to his own domestic customers, could be a ‘worker’ for employment law purposes.

Their work arrangements tend to be midway between self-employment and employment in that they do not have the ‘master/servant’ relationship that an employee has with their engager (the person or company taking them on); but neither are they entirely their own bosses, deciding how much to charge for their work, how much holiday to give themselves, and so on.

This is why workers have a minimum set of employment rights to help protect them, including the right to be paid the minimum wage, to a workplace pension and to annual leave.

What is the problem with ‘worker’ status?

The definition of a ‘worker’ in the Employment Rights Act 1996 includes anyone employed under a contract of employment but also extends to some individuals who are self-employed. This would be where that individual has:

‘entered into or works under any contract, whether express or implied and (if it is express) whether oral or in writing, whereby the individual undertakes to do or perform personally any work or services for another party to the contract whose status is not by virtue of the contract that of a client or customer of any profession or business undertaking carried on by the individual’.

(Although ‘workers’ can sometimes be defined slightly differently depending on what right you are talking about, this main Employment Rights Act 1996 definition is picked up for the main things like minimum wage and annual leave).

This definition tells us that there are three strands to ‘worker’ status:

2) The worker generally must carry out their work personally, rather than being able to send someone in his or her place.

3) The worker must not really be in business on their own account (so, the engager isn’t a client or customer of the worker’s own business)

‘Worker’ status is basically for those who do not reach the ‘pass mark’ for acquiring employee status, but even to us, there is a lack of clarity over where the line is (or should be) drawn!

What does this judgement mean?

In summary, Uber argued that drivers are independent contractors who work under contracts made with customers and do not work for Uber. Basically, they tried to argue that points 1 and 3 above did not apply.

The Supreme Court disagreed. It said that even though there is no written agreement between Uber and the drivers, in reality (and it is what happens in reality that counts), Uber London contracts with passengers and engages drivers to carry out bookings for it, which is the relevant legal relationship.

The Court also found that the drivers and services offered were tightly defined and controlled by Uber. The drivers had little or no say over their pay and working conditions because they were in a subordinate and dependent position in relation to Uber. The drivers therefore had little or no ability to improve their economic position through professional or entrepreneurial skill (thus, were not in business on their own account). In practice the only way in which they can increase their earnings is by working longer hours while constantly meeting Uber’s measures of performance.

The judgement means that the specific Uber drivers that took the case (Mr Aslam and Mr Farrar), are entitled to certain employment rights which they were being denied. Other Uber drivers working at around the same time as the claimants (2016), will no doubt be taking a careful look at their positions.

Although we understand that Uber don’t consider that the ruling applies to all current and future staff because of changes made to their business practices, it is an important case with far reaching implications for other workers in ‘self-employed’ roles, where they have little autonomy and derive all or most of their income from the business they work for.

It is important that you seek advice if you are unsure on your employment status and/or believe you’re your employment rights have been breached. You could try ACAS, an employment law adviser or solicitor (they may offer a free initial consultation) or a trade union, if you belong to one (or want to join one).

Because employment law and tax law are different, the decision does not change the drivers’ position as ‘self-employed’ for tax purposes. This means the drivers still have to submit annual self- assessment tax returns to tell HMRC about their earnings. They will continue to pay their income tax and National Insurance through self-assessment rather than through the Pay As You Earn system. This is confusing enough in itself, and it also has a knock-on effect for entitlement to statutory payments (as we consider below).

What’s the problem with SSP?

This is because currently, most Uber drivers are treated as self-employed for tax purposes and so are paid gross. Not being paid under the Pay As You Earn system means that there is no secondary contributor (someone who is liable to pay Class 1 secondary National Insurance Contributions). Secondary contributors are responsible for administering and part-financing statutory payments under the Social Security Contributions and Benefits Act 1992. If there is no secondary contributor, then it follows that the worker cannot be entitled to Statutory Sick Pay or any other statutory payments for that matter, e.g. Statutory Maternity Pay, etc.

As we explained in our opening, some of the news stories following the case incorrectly concluded that the drivers involved would be entitled to SSP as a result of the decision because they assumed SSP is an employment law right, which as we have explained, is not the case.

Therefore, entitlement to Statutory Sick Pay would require not only a change in the Uber driver’s employment law status but a change in their tax status as well (more on this below). In the absence of this, Maternity Allowance or Employment and Support Allowance may be available instead from the Department for Work and Pensions (DWP)

Why is it all so complicated!?

These complexities demonstrate the need for a more certain and simpler system – for both individuals and businesses to navigate.

Over three years later, unfortunately – the consultation is still labelled with ‘feedback being analysed’. Sadly it is a case of ‘watch this space.’