We have responded to the Low Pay Commission (LPC) consultation 2022 looking at the impact of the minimum wage, the rates from 2023 and on enforcement and compliance issues. 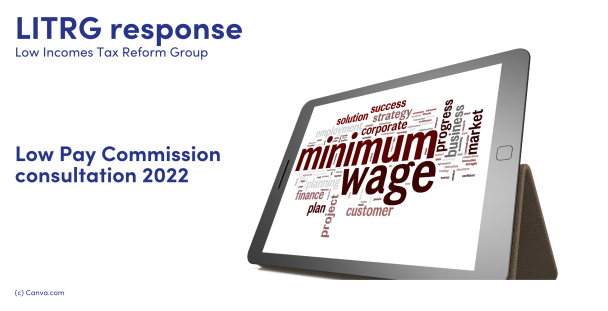 The LPC’s projections are to raise the National Living Wage from £9.50 to £10.32 (within a range of £10.14 to £10.50). We welcome the government’s bold ambitions here. However, in our response, we urge caution, particularly given all the ‘shocks’ to the economy such as Brexit, Covid and the Ukraine war that now seem to be culminating in a tight labour market, volatile economic growth and inflation.

Many employers will have already been contending with difficult trading conditions and increasing costs and may struggle to absorb any further large increases at this time. We tell the LPC there is a risk of practices we are aware of, such as holiday pay skimming, simple underpayment of the minimum wage and the false self-employment of workers, increasing. The fact the Single Enforcement Body has yet to materialise and there is no clear timetable for when this may happen, does not send out a strong deterrent message to employers who may be considering turning to such practices. We say, on the one hand, we appreciate how important a decent pay rise can be every year, in terms of morale and productivity. On the other hand, there is an important balance to be found to ensure employers don’t react in a way that leaves workers even worse off.

Despite the minimum wage, we note that in-work poverty rates are the highest they have ever been. We recommend that any future increases in the minimum wage should be considered in the context of their interactions with tax, National Insurance and other systems, such as student loans, universal credit and tax credits. We share an example, where there is a marginal deduction rate (which measures the impact of earning an additional £1 on tax and benefits) of 67% on a minimum wage increase from £9.50 to £10.50.

We also point out that even people that are not on the minimum wage can be impacted by changes to the minimum wage and this needs to be factored into decision making about any increases. For example, the minimum income floor policy (MIF) in universal credit (UC), which assumes a notional level of income for self-employed claimants whose earnings fall below a threshold, is directly linked to the NLW. Effectively, this means the higher the NLW, then the higher the MIF is set. Because the MIF creates an artificial level of income that is used to calculate the UC award, the higher that MIF figure, then generally the lower the UC award. This may well be detrimental for self-employed workers who cannot simply increase their income in response to a minimum wage increase.

In terms of enforcement, we suggest that workers would ultimately benefit more if HMRC concentrated on arguably more complex cases involving ‘worker’ status and false self-employment. For example, on the recent list from December 2021, 208 employers were named and shamed. The government figures show that a large proportion (37%) of NMW breaches were for incorrect deductions from employee wages, including for costs and expenses of acquiring and maintaining uniforms. The company at the top of the list underpaid its 3,600 staff by an average of £42 each, which implies the employer had fallen into such a pitfall. On the December 2021 list, only 4 employers were on the list for ‘worker status error’.

To help support compliance and prevent small, technical NMW breaches such as around uniforms (which of themselves, probably do not cause significant worker detriment), the minimum wage manual that used to be available to employers in PDF, but which has now been removed, needs to be reinstated. There is now only an HTML version available which is split into different sections with expandable sub-sections with no cover page, no contents page and no page or paragraph numbering. The problem is that it makes it extremely hard to get an overview of what is in the manual (and the search bar can be easily missed). We are worried that employers, who can’t see at a glance that what they are trying to research is covered in the manual, will just give up. Ctrl+F only works if the sub-section is expanded (or unless you click ‘expand-all’ but this is also easily missed). We know from experience that when trying to research something that may be difficult and technical, employers may favour PDFs which can be easily printed off, to support them in this.

The consultation document can be found on GOV.UK.

Our submission can be found here.