What happens to property owned jointly by the deceased and someone else?

This page explains what happens to the ownership of assets that are jointly owned by the deceased and someone else at the date of death. We are not legal experts so this is an overview only and advice should be sought from a qualified practitioner where there is any doubt and/or the sums are significant. 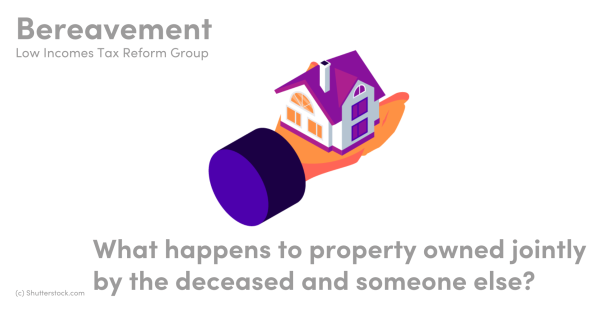 The deceased had joint bank accounts. What happens to the income from them, and the balance in the accounts?

Where accounts are held in joint names of spouses or civil partners, the presumption is that the income is split equally unless the taxpayers tell HMRC that it should be split in a different proportion by sending them form 17. Note that by completing this form the joint account holders are declaring that the underlying capital (which basically means the balance in the accounts) is held in that proportion. For other joint holders, it is a question of fact as to how much capital belongs to each account holder – and each account holder is entitled to the same proportion of any interest.

What about income that is paid on a joint account after one of the account holders has died?

What happens to partnership income and assets when a partner dies?

Normally this would be covered by the partnership agreement, if there is one. In many cases the capital account of the deceased would be paid to his estate, but legal advice should be sought.

What about other investments owned jointly?

Shares in companies normally follow the same principles as for bank accounts above. Note, however, that for the jointly owned property rule to apply to shares,  the shares would actually need to be owned jointly rather than each person owning an equal number of the same holding.

For investment bonds and other types of insurance policy, you will need to contact the relevant financial institution to establish its status.

For heritable property (bricks and mortar like houses, shops and so on) see below.

The deceased owned their home jointly with someone else. What happens to it now?

This depends on how the title deeds of the property show ownership. This is something that is normally set out when a property is purchased, but can be changed later. The principles below can apply to other properties owned by the deceased, for example holiday homes, shops, warehouses, let properties, and so on.

In England, Wales and Northern Ireland, property may be owned as ‘joint tenants’ or ‘tenants in common’.

Where it is held as joint tenants, on the death of one of the owners, the property becomes owned by the other joint owner. For example, Joe owns a property as a joint tenant with his dad, Stan. When Stan dies, the property automatically passes to Joe as sole owner.

Where property is owned as ‘tenants in common’, each person owns their separate share of the property and on the death of one of the owners it does not pass automatically to the other owner(s), but instead it will pass through the deceased’s will or according to the laws of intestacy, if there is no will. For example, Freda and her husband, Carl, own their family home as tenants in common. When Carl dies, his will passes his share in the house to their son, Mike, who then owns the house jointly with his mother as tenants in common.

In Scotland the terminology is different but the same two options are available. Normally when property is purchased jointly there is a survivorship clause, meaning that on the death of one of the joint owners, their share in the property automatically passes to the survivor(s). In order to allow a similar position to the tenants in common situation described above, this survivorship condition needs to be ‘evacuated’.

Any property owned as a joint tenant (or, in Scotland with a survivorship clause intact) passes outside the will to the other joint owner. But this does not mean that the value of the asset is ignored for inheritance tax (IHT) purposes – the value still needs to be included in the estate, though there might be no inheritance tax on it (for example, if it is inherited by a UK domiciled spouse or civil partner).

Where can I get further information and help?

The personal savings allowance is described in our savers, property owners and other tax issues section.

For further information, see our separate page Getting help with bereavement and inheritance tax.