What is dual residence?

It is possible to be resident for tax purposes in more than one country at the same time. This is known as dual residence. 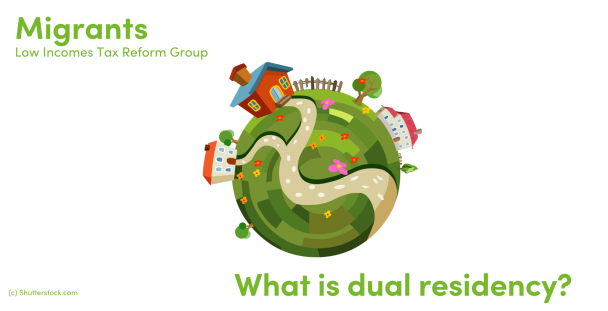 If you are resident in the UK and another country and so are liable to tax on your worldwide income in both, you have to look at the double taxation agreement between the two countries to find out where you should pay tax.

If you have dual residence with the UK and another country, then a double taxation agreement should prevent you from being taxed twice on the same income.

Mary is a chef and leaves Ireland to come to the UK to look for work on 1 July 2022. She stays with friends. She does not find any work and returns to Ireland for two months over Christmas (she finds a Christmas job in a hotel in Dublin). She comes back to the UK in February 2023 and starts looking for work again.

Under UK rules, Mary is UK tax resident for 2022/23 as she spent more than 183 days here, so she is taxable in the UK on her worldwide income. Under Ireland’s rules, Mary is tax resident there too. This leaves her Christmas job income potentially subject to both UK and Irish tax, due to her being treated as tax resident in both countries.

Mary can look at the double tax treaty to see if it can help avoid this double taxation situation. Where a dual-residence situation causes double taxation, most treaties contain a series of ‘tie-breaker’ tests to help determine which country’s residence takes precedence. They generally say (under Article 4) that the ‘winner’ country (that is, the country where you are resident for the purposes of the treaty) is:

The answer to the first test for Mary is ‘Ireland’ as this is where her family home is. As she meets the first test she does not need to look at the remaining tests. This means that Mary is treated as ‘treaty resident’ in Ireland and ‘treaty non-resident’ in the UK – these special treaty rules override the actual position.

If you are domestically resident in the UK (that is, under the Statutory Residence Test) but non-resident here under the terms of a double tax agreement, you are broadly taxed as if you were domestically non-resident for certain sources of income. However, this is not a definitive rule, and you must check the specific articles in the relevant treaty for each source of income. In particular, please note your treaty residence status does not actually change your domestic resident status – it only has effect to limit the UK’s right to tax income which is otherwise taxable.

In this case, the treaty says that the UK will give up its right to tax Mary on her Irish employment income as it will be taxed in Ireland only. Mary will therefore need to claim exemption under the treaty on her UK tax return in respect of this income.

There is a list of the current double taxation agreements on GOV.UK.

If you are dual resident in the UK and a country that does not have a double taxation agreement with the UK, then you can usually set off tax paid in one country against tax due in the other country.

We recommend that you seek professional advice if you find yourself in a dual residence situation.

When is someone resident in the UK?