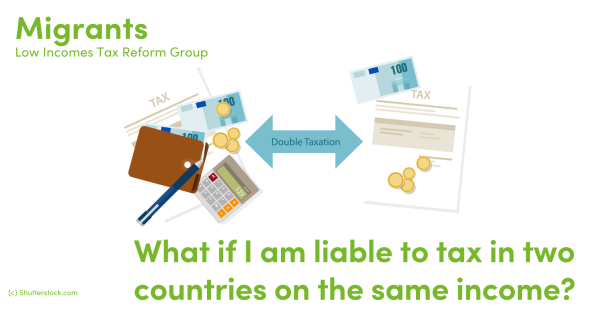 What is double taxation?

Different countries have their own tax laws. The fact that you pay tax in one country does not necessarily mean you do not need to pay tax in another.

If you are resident in two countries at the same time or are resident in a country that taxes your worldwide income, and you have income and gains from another (and that country taxes that income on the basis that it is sourced in that country) you may be liable to tax on the same income in both countries. This is known as ‘double taxation’.

For example, an individual who is resident in the UK, but has rental income from a property in another country, will probably have to pay tax on the rental income in both the UK and that other country. This is a common situation for migrants who have come to the UK to work to find themselves in. However you should remember that in practice, the remittance basis helps to prevent double taxation where you are a UK resident with foreign income and gains abroad.

Another common situation when double taxation occurs is where an individual who is not resident in the UK but who has UK-sourced income and remains tax resident in their home country.

Double taxation can also arise if you are resident in two countries at the same time. See our page on dual residence for an example.

Where two countries try to tax the same income, there are a number of mechanisms to give tax relief so that you do not end up paying tax twice. The first mechanism to consider is whether the double tax agreement between the UK and the other country limits either country’s right to tax that income.

What are double taxation agreements?

A double tax agreement effectively overrides the domestic law in both countries. For example, if you are non-resident in the UK and you have UK bank interest, this income would be taxable in the UK as UK-sourced income under domestic law. However, if you are resident in France, the UK-France double tax agreement states that the interest should only be taxable in France. This means that the UK must forgo its right to tax that income. In this situation, you would make a claim to HMRC (in practice, this would usually be made on a Self Assessment tax return) to exempt the income from UK tax.

Alternatively, they may allow a set-off of tax paid in one country against tax due in the other. If you are a UK tax resident (including UK ‘treaty’ resident), the UK will generally give a ‘credit’ for overseas tax paid on income which is sourced overseas. Similarly, if you are tax resident in another country, that country may give credit for UK tax paid on UK-sourced income (for an example of this, see the guidance below on What is the position for doubly taxed UK employment income?).

In another scenario, a double tax agreement may provide for income that is not exempt from tax to be charged at a reduced rate. You can find out more about this in HMRC’s helpsheet HS304 ‘non-residents – relief under double tax agreements’ on GOV.UK.

The method of double taxation ‘relief’ will depend on your exact circumstances, the nature of the income and the specific wording of the treaty between the countries involved.

It is also possible for there to be more than two countries involved, for example a national of one country may be living in the UK and have foreign income from a third country.

You should finally be aware that some countries, such as Brazil, do not have a double tax treaty with the UK. If that is the case, you may still be able to claim unilateral tax relief in respect of the foreign tax you have paid.

You will probably need to seek some professional advice if you find yourself in a double taxation situation. We tell you how you can find an adviser on our Getting Help page.

There is a list of the current double taxation agreements on GOV.UK.

What is unilateral relief?

As mentioned above, even if there is no double taxation agreement, tax relief may be available, by means of a foreign tax credit. This has nothing to do with working tax credit or child tax credit.

For example, if you pay tax at 15% on your foreign income in the country in which the income arises, then you may still have to pay tax in the UK if you are resident here. If the UK tax rate is 20%, you would effectively only have to pay 5% of tax in the UK, as you would be given relief (or a foreign tax credit) for the 15% of tax paid overseas.

What is the position for doubly-taxed UK employment income?

If you come to the UK and have UK employment income that is taxed in your home country, you will usually need to pay UK tax. Your home country should give you double tax relief by giving a credit for UK taxes paid. However, if you are resident in a country with which the UK has a double taxation agreement, you may be eligible for relief from UK tax if you spend fewer than 183 days in the UK and you have a non-UK employer.

Where taxes are due in both countries, the credit will be restricted to the lower of the UK taxes suffered and the home country tax liability on the same income, which effectively means that you will always end up paying at the higher of the two rates overall.

Mark leaves Germany in August 2021 for a five-month working holiday to the UK. He works in various bars, earns the equivalent of £13,500 and pays tax in the UK of £200.

Under UK rules, he is not resident, so he is taxable in the UK on his UK-sourced income only. Mark remains resident in Germany, and so is taxable on his worldwide income there. The double tax treaty tells Mark that the UK has the main right to tax the income and that if Germany also wants to tax it then the foreign tax credit method should be used, to avoid double tax.

In such situations, you should seek professional advice from a tax adviser in the country concerned.

If the tax authorities in your home country refuse to give the double tax relief, you should contact HMRC for help. You can also find out how to get help on our Getting Help page.

There are a couple of things to note about doubly-taxed UK employment income:

1. Anyone who is classed as a tax resident of the UK can normally earn a certain amount of money each year, without paying any UK income tax – the personal allowance. Some non-residents can have it too – for example, if you are a European Economic Area (EEA) national or a UK national. As the personal allowance is so generous (for 2021/22 it is £12,570) it is possible that any UK employment income will fall within it, meaning there is no double tax.

2. Whilst you will normally have tax deducted by your UK employer, you may be entitled to reclaim some or all of this back from HMRC. This is an important point because UK withholding tax amounts may not represent the true final tax liability. You cannot claim a foreign tax credit in respect of amounts which are refundable by the relevant tax authority.

What if I am a teacher or student?

Certain types of visitors to the UK receive special treatment under the terms of a double tax agreement, such as students, teachers or overseas government officials.

For more information you should see section 10 in HMRC’s RDR1 booklet. You could also try contacting HMRC’s Residency unit, or finding a tax adviser to help you by visiting our Getting Help page.

How are foreign income and gains taxed?