When you retire, your income and where it comes from will probably change. This means that the tax you pay and how you pay it might change too. 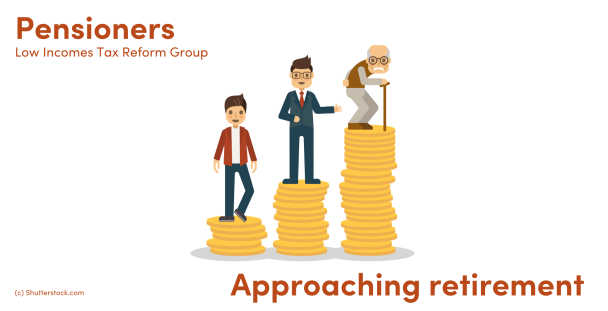 You might not stop work completely when you reach retirement, but the period around the state pension age is still a major change in your life. It is a time when things can go wrong with your tax affairs. You may also have to make some important decisions.

When do I reach state pension age?

The state pension age for both men and women born after 5 December 1953 is gradually increasing from 65 to 68.

What do I need to consider when I approach state pension age?

When these changes happen, you should try to understand how they affect your tax and what you need to do.

You can continue to work after you reach your state pension age as a forced retirement age no longer exists. There are, however, some circumstances when you can be made to retire. There is more information on GOV.UK.

What should I do as I approach state pension age?

There are steps you can take as you approach your pension age to help you plan for your future.

Can I increase my state pension entitlement?

You can check your pension age on GOV.UK.

The number of years you need to have paid, or been credited with, National Insurance contributions in order to qualify for a full state pension changed with the move from basic state pension to the new state pension as follows:

You will usually need at least 10 qualifying years of National Insurance contributions or credits to qualify for any state pension. If you do not have 10 qualifying years in the UK but you have made social security contributions in another EEA member state or Switzerland over the course of your working life, or a country with which the UK has a bilateral social security agreement, your periods of overseas contributions can help you satisfy this condition. Please see our section on National Insurance and the UK state pension for migrants for more details.

If you are not yet of state pension age, but perhaps have stopped work and are looking after family members’ children – usually while those children’s parents or carers are working – you might be able to claim credits towards your state pension.

You can check on GOV.UK how much state pension you could get, when you can get it and whether you can increase it.

It may be possible to pay voluntary National Insurance contributions if there are gaps in your record to increase your pension entitlement. You should note that there are time limits for doing so. Voluntary contributions may be either:

⚠️ Before making any payment of voluntary contributions you should check with the Future Pension Centre that it is in your best interests to do so and that payment will increase your pension entitlement. This is particularly important if you are considering making payments for periods prior to 6 April 2016.

For help and advice on whether there are ways to increase your state pension you should contact the Future Pension Centre. Full contact details can be found on GOV.UK. You may also want to get independent financial advice.

From April 2022, the full new state pension is £185.15 per week, but if you were an employee who paid National Insurance contributions at the contracted-out rate this could affect the amount of state pension you will receive in the future. Read on for more information about this.

Under the old system, the state pension was made up of two parts:

If you were in what is known as a defined benefit company pension scheme – where what you are paid in retirement is related to your salary – you are likely to have been 'contracted out' of the additional state pension. This means that you would have paid a lower rate of National Insurance contributions and will have earned replacement pension benefits in an employer scheme or a personal pension.

Those affected will include public sector employees – civil servants, NHS employees, police officers, teachers and members of the armed forces.

What does this mean for new state pension entitlement?

Despite having what you thought were 35 years of National Insurance contributions, being contracted out in the past means that you will not necessarily get the full amount of the new state pension per week – although you can improve your entitlement by paying contributions after 5 April 2016. While you will get less than the full amount per week, you will still be paid at least what you would have got under the old state pension.

The rules around contracting out and new state pension are complicated. Detailed guidance on how the transitional arrangements apply and examples can be found on GOV.UK.

Checking if you were contracted-out

If you have, or previously had, a married woman’s reduced rate election and were contracted-out your payslip would show the letter “E”. Letter “B” would mean you were not contracted-out.

What is a qualifying year for the purpose of entitlement to state pension?

A qualifying year is a year when sufficient National Insurance contributions (NIC) have been paid, treated as having been paid, or credited to enable a claim to state benefits (mainly the new state pension) based on those contributions.

Remember that Class 1 NIC are calculated and paid over each time an employee is paid, and Class 2 NIC are due for each week an individual is self-employed, provided they earn over the Lower Profits Limit (2022/23 onwards). For years up to and including 2021/22, individuals who are self-employed pay Class 2 NIC provided they have profits greater than the Small Profits Threshold.

For 2022/23 onwards, individuals who are self-employed are treated as having paid Class 2 NIC for each week they are self-employed if they have profits between the Small Profits Threshold and the Lower Profits Limit for the tax year.

National Insurance credits are made for specific weeks in a tax year. For example, if you receive Carer’s Allowance for the first four weeks of the tax year, your NI credits relating to the Carer’s allowance are made for those specific four weeks.

You can check your future state pension entitlement on GOV.UK and, if you do not agree with the information held, contact HMRC.

The easiest way to explain the concept of the qualifying year is to look at examples. The position for employees is slightly more difficult, so we consider other individuals first. The examples do not cover all possibilities and you should check your position with HMRC before deciding whether you should pay voluntary NIC. Also, note that if you ever paid NIC at the contracted-out rate, your state pension may be less than the full amount, as explained in the question above.

The individual needs to have paid or be treated as having paid Class 2 NIC for the full tax year to make a qualifying year. That is, they need to have paid 52 weeks’ worth of Class 2 NI contributions.

The individual has a qualifying year.

The important thing is that the individual needs to have paid, or be treated as having paid, Class 2 NIC or have received NI credits for each week of the tax year. It is not sufficient that someone pays 26 weeks’ worth of Class 2 NIC and receives 26 weeks’ worth of NI credits: if that individual has received NI credits for a week for which they have also paid (or have been treated as having paid) Class 2 NIC, there must be a week for which no NIC has been paid or credited. That individual could choose to pay voluntary Class 3 NIC for that week, if they wanted to make up a qualifying year for state pension purposes.

Employed for whole of tax year and receives no NI credits

A qualifying year is generally a tax year in which an individual has paid or is treated as having paid NIC or was credited with NIC on earnings of at least 52 times the lower earnings limit (LEL). The weekly LEL for the 2022/23 tax year is £123. This means you need to have earned at least £6,396 (for 2022/23), but you need to exclude any week where you earned less than £123. Thus you could satisfy a qualifying year by earning £300 for 25 weeks in the tax year and only earning £100 in total for the other 27 weeks of the year; but you would not satisfy the condition if you earned £300 for 10 weeks and then £100 for the other 42 weeks of the year. We explain what is meant by the LEL and being treated as having paid NIC in more detail in our employment section.

Despite only working for part of the year, you may have earned enough to have a qualifying year without the need for NI credits. Read the paragraph above. Otherwise, you will need to work out how many weeks’ contributions your employed earnings qualify you for and then add on the number of weeks you get NI credits for (but remember that if you are employed for a week and earn over the LEL for that week, you cannot count NI credits you receive for that same week).

Government information on tax and National Insurance for pensioners can be found on GOV.UK.

For government information on pension choices, go to Pension Wise from MoneyHelper. We also help you understand tax on taking money out of your pension in our further guidance.

For government information on planning your retirement income go to GOV.UK.

There is also government information on planning for retirement at Your Pension.

What is the tax position when I take money from my pension flexibly?