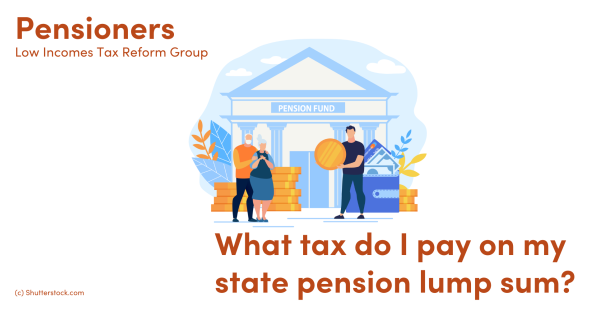 When might I receive a state pension lump sum?

Alternatively, you may receive a state pension lump sum because your spouse or civil partner chose to defer their state pension but died before any lump sum was paid.

If you reached state pension age on or after 6 April 2016, you may still defer receiving your state pension, but you will not be entitled to receive a lump sum.

You can find out when you are due to reach state pension age using the calculator on GOV.UK.

⚠️ Important note: The special tax rules on this page do not apply to any payments you might receive when you backdate a claim to the state pension (see below). They apply only to lump sums accrued when deferring pre-6 April 2016 state pensions.

You can backdate a claim to the state pension by up to 12 months. So if, for example, you reach state pension age on 1 October 2021 but do not claim it at that time, up to 30 September 2022 you can still backdate your claim as if you had originally made it at 1 October 2021.

In such cases, the state pension will be taxed in the year it would have been paid, had the claim been made at the appropriate time. Therefore, using 1 October as in the above example, any state pension that would have been due to be paid to you between 1 October 2021 and 5 April 2022 will be taxable in the 2021/22 tax year. Any amount due from 6 April 2022 will then be taxable in 2022/23.

This is effectively just a catch-up payment of the state pension you would have been due to receive if you had claimed it earlier, so there is no special tax treatment in this situation.

Put simply, the rate of tax that will be used on your state pension lump sum is generally the highest rate that applies to your other income for that tax year.

All else being equal, this is intended to avoid the lump sum (or part of it) being taxed at a higher rate than you would have paid had you not deferred it. However, the rules may not necessarily give that result.

While this can mean you can pay no tax at all on such a lump sum (if all of your taxable income falls within your personal allowance, for example), it is important to bear in mind that when you are looking at your ‘other income’ you must ignore the 0% rates which are used to tax savings and dividend income – that is the starting rate for savings, the savings nil rate (or personal savings allowance) and the dividend nil rate (or dividend allowance). In other words, the question is what is the highest rate of tax which would apply if income falling in these 0% rates were taxed at the normal rates. This can make a significant difference to the tax payable on the lump sum. See below for some examples.

For this purpose, because we are looking at the tax rate applicable, we ignore any allowances and reliefs which are in fact ‘tax reducers’ in the tax calculation, such as the marriage allowance (as it applies to the member of the couple receiving it) and the married couple’s allowance. Please see the page What tax allowances am I entitled to? for more information, but see also the ‘word of warning’ note below relating to the marriage allowance.

From 6 April 2019, a Welsh income tax also applies, however for 2021/22 there is no practical effect on the amount of tax Welsh taxpayers have to pay.

The Pensions Service deducts tax from the lump sum on making the payment, having taken account of information that you provide as to your rate of tax. As the calculation is made during the tax year, it will not always be correct. If the wrong tax rate is used an overpayment of tax may arise or you may have to pay more tax to make up the difference. HM Revenue & Customs (HMRC) will make the adjustment after the year end.

If you live in Scotland and are a Scottish taxpayer, The Pensions Service deducts tax at either 20% or 40% (UK rates), rather than the Scottish rate at which you are liable. If the correct rate should be anything other than the Scottish basic rate (20%), then the deduction will be incorrect. You will either have an underpayment or an overpayment of tax. Normally HMRC will reconcile the position after the end of the tax year, and they will send you a repayment or ask you to pay any additional tax that you owe. If you are a Scottish taxpayer, it is particularly important therefore that you check what tax has been deducted and how much you should have paid.

If she then claims a state pension lump sum in 2021/22, she will be a taxpayer if her other taxable income is more than £11,310. Tax on the lump sum would then be due.

When is a state pension lump sum taxed?

For example, Richard decides to stop deferring his state pension at the end of the 2020/21 tax year and notifies the Pension Service of his claim to the state pension on 5 April 2021. He tells them that he wants to claim a lump sum for the period in which he has been deferring his claim. He is informed that the first weekly entitlement date for his state pension will be 12 April 2021. This means that his lump sum will be taxable in 2021/22 unless he claims to delay receipt of it until April 2022, in which case it will be taxable in 2022/23 (see below). So even though Richard claimed his state pension in 2020/21, the default tax point for the lump sum is in 2021/22.

You can choose to delay payment of the lump sum to the next tax year to the one in which you stop deferring, which means that it will then be taxed in that later year. You might choose to do that if, for example, you are a basic rate (20%) taxpayer in the year you stop deferring but will be a non-taxpayer the following year.

⚠️ Note: if you wish to delay receiving a state pension lump sum to the start of the next tax year, you need to tell the Pension Service when you claim the lump sum, or within a month of the date you make the claim.

What if I die before I receive my state pension lump sum?

If you are married or in a civil partnership, the lump sum will be paid to your surviving spouse or civil partner as noted in the question below. Otherwise the lump sum will be paid to your estate if you had claimed it before you died, but it had not yet been paid (if you had not claimed it, any accrued lump sum is lost and only three months of State Pension can be claimed). Normally the lump sum would become payable and be liable to income tax in the tax year of your death.

If the lump sum is payable to your estate, it will form part of your estate for inheritance tax purposes.

What tax do I pay on my late spouse’s (or civil partner’s) state pension lump sum?

The tax is calculated as shown above and is payable by you for the tax year when the lump sum payment is due to be paid. The due date for payment of that lump sum depends on whether you are already receiving your state pension when your spouse or civil partner dies.

Monique, who lives in England, is claiming her deferred state pension lump sum. The lump sum that has accumulated is £55,000 and she claims it at the same time as her state pension.

First, we need to work out what Luke's taxable income (leaving out the state pension lump sum) is for tax year 2021/22:

When he applies for a state pension lump sum, the Department for Work and Pensions (DWP) (that is, The Pensions Service) ask Luke to advise them of his expected highest rate of income tax. Assuming he declares the basic rate, then The Pensions Service will take off tax of 20% from the lump sum at the time they pay it to him.

So, his taxable income (excluding the state pension lump sum) for 2021/22 is:

Next, we determine the highest rate of tax payable by Graeme, ignoring special rates for savings income. Graeme’s taxable income of £930 falls entirely within the basic rate band of tax.

⚠️ Note: If Graeme had any tax ‘exempt’ income such as savings income from Individual Savings Accounts, this would be left out of the above calculations. That is, it would not affect the rate of tax on his deferred state pension lump sum.

So, her taxable income (excluding the state pension sum lump) for 2021/22 is:

Next, we determine the highest rate of tax payable by Debbie, ignoring special rates for savings income and dividends. Debbie’s taxable income of £6,330 falls entirely within the basic rate band of tax.

This is despite the fact that Debbie does not actually have a tax liability on her income – her earnings and state pension fall within her personal allowance of £12,570. Her savings interest falls within the remainder of her personal allowance, the £5,000 0% starting rate for savings band (within the basic rate band) and the personal savings allowance. Her dividend income falls within her dividend allowance of £2,000.

Jane, a basic rate taxpayer who opts to receive her lump sum in a later tax year

Does taking a deferred state pension lump affect tax on my capital gains?

The deferred state pension lump sum is not included in your total income when calculating your tax. As described above, you work out the highest main tax rate that applies to your other income and then that is used to tax the lump sum.

This means that in turn, your basic rate band is not ‘used up’ by the lump sum and is therefore available to use when working out any capital gains tax for the year. Likewise, the capital gain will not affect the rate of tax on the lump sum, as the legislation states that the rate of tax applied to the lump sum is calculated by reference to the income tax calculation, and the highest tax rate applied to your other income for the year.

The DWP has published a guide on deferring your state pension, which includes information on state pension lump sums. You can find this guide on GOV.UK.

What income is taxable?

What is state pension deferral?