On this page we provide some worked examples of how to work out your capital gains tax in various scenarios. 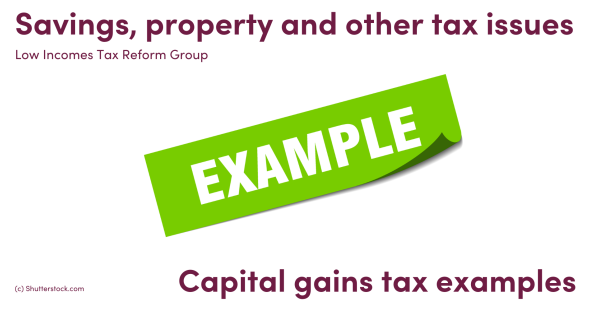 Jenny sells 1 acre of land for £10,000 which is part of a 5-acre field. The other 4 acres are worth £70,000 at the time she makes the disposal, as they are more likely to have development value in future than the acre just sold.

In working out her capital gain on disposal of the 1 acre, she will deduct a cost figure calculated as A x B/C where:

Alternatively, Jenny could decide to simply deduct the sales proceeds of £10,000 from the cost price, leaving her with a base cost of £10,000 to be used against any future disposals. This is using the relief for small part disposals of land.

However, if Jenny had made no other capital gains in the same tax year, she would not want to use the small part disposals of land rules, as the £7,500 gain would fall in her annual capital gains exempt amount. This would mean she would keep a higher base cost to set against any future disposal of the remaining 4 acres, possibly minimising a future capital gains tax liability.

In 2022/23 Hasan’s taxable income, after all allowable deductions and the personal allowance, is £24,500. Hasan is not a Scottish taxpayer.

In part two, we consider the position if Hasan is a Scottish taxpayer.

His CGT liability as a Scottish taxpayer is therefore no different than if he were paying tax in any other part of the UK, even though his income tax liability is different (being calculated at the Scottish income tax rates).

Eileen: loss on sale of shares

Harold and his wife Sandra separated in March 2021.

The family home was purchased in December 2000 and was held in Harold's name only.

Suppose that a few years later, Harold sells his flat, having lived in it for the entire period of ownership as his main residence. He is eligible for full private residence relief on any gain, even though his period of ownership overlaps with the final period exemption on the former family home.