Our guidance is aimed at low-income people. However, you might yourself be on a low income but have a partner on a higher income. If your partner is affected by the high income child benefit charge (HICBC), there are some traps which you need to be aware of. Here, we explain what the charge is and what you need to do to avoid the traps. 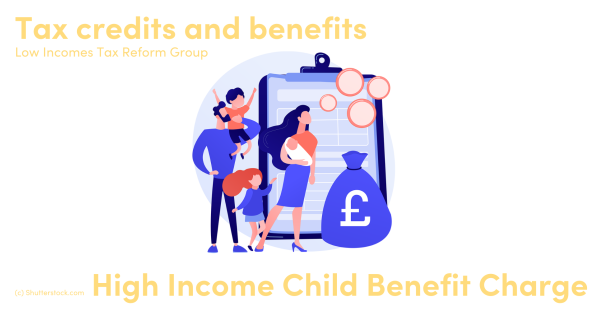 What is the HICBC?

The HICBC is a tax charge designed to claw back child benefit where either you or your partner has adjusted net income in excess of £50,000.

Adjusted net income (explained further on GOV.UK) is not necessarily the same as taxable income as there may be deductions you can make from your income when working out if you or your partner has exceeded the £50,000 threshold. Note that adjusted net income includes the taxable value of benefits-in-kind from your employment, such as a company car or private medical insurance.

Child benefit is effectively withdrawn at a rate of 1% for each £100 earned by the higher-income partner over £50,000 a year. Therefore, the benefit is fully withdrawn where income of the higher-income partner reaches £60,000 a year. These figures apply for each tax year – so you have to look at your income for the year starting in 6 April one year through to 5 April the next year.

The HICBC is calculated based solely on the adjusted net income of the higher-income partner in a couple – regardless of who actually receives the benefit, the other partner’s income level or whose child the benefit payments are for. This can lead to problems for couples who prefer to keep their financial affairs separate and confidential. It can also present problems when a couple separates.

For an example of how the charge is calculated, see the information at revenuebenefits.

The charge applies to the higher-income partner in a couple, irrespective of the income of the other partner. Therefore, as a low-income or non-earning partner you can find yourself a member of a household to which the charge applies, even though it is your partner who has the legal obligation to pay it.

Where the charge applies to your partner, it has consequences for the whole household. The charge reduces the income available to your household, but it can have more subtle and indirect consequences. The most common of these is where, as a household, you decide not to claim child benefit where the charge would apply because there would appear to be no point in doing so. This is especially likely to be the case where your partner would be required to file a Self Assessment tax return as a direct result of the charge. Many people decide it is not worth this additional administration burden for no financial return.

Also, not claiming child benefit will have a consequence for the child, as they will not be automatically issued with a National Insurance number when they reach 16. This will mean the child will need to actively obtain one and they may need to have a face-to-face interview to do so.

Couples liable to the HICBC are instead encouraged to claim the benefit, and in order to avoid having to pay it back and file a tax return, you can opt not to receive payments. This is done by ticking a box on the child benefit claim form (Question 62, Section 4) or, if child benefit is already in payment, by completing a separate form.

If you have stopped your child benefit payments because of liability to the HICBC but your circumstances change (for example, you have an unexpected reduction in income such that the child benefit is not fully clawed back via the HICBC) then you can restart child benefit payments. You can also request to reinstate payments for the two previous tax years, if applicable, by contacting the child benefit office via telephone. Alternatively, you can contact them by using this online form, but you should be aware that you are not provided with confirmation of the submission. In either case, you should make a note of the information provided.

Is my partner required to file a Self Assessment tax return if he/she is liable to the HICBC?

Individuals affected by the charge are required to register to file a Self Assessment tax return (if they do not already do so) – even if their only source of income is from PAYE. However, the charge may be collected via PAYE by means of an adjustment to a tax code.

Importantly, it is the higher-income partner in a couple who has the obligation to file a Self Assessment tax return, not the lower-income partner, even if the latter is the one who receives the benefit.

What if my partner was liable to the HICBC in prior years and no Self Assessment tax returns have been filed?

Your partner should contact HMRC straight away and register for Self Assessment so he or she can file tax returns for the years concerned. Where tax (including the HICBC) is unpaid, penalties may be charged for the failure to notify.

Despite an HMRC marketing campaign when the HICBC was first introduced, many of those affected were unaware of this obligation and as a result have received penalties for their ‘failure to notify’. HMRC reviewed these penalties for tax years 2013/14 to 2015/16 inclusive. Recognising that those not in scope of the HICBC at the time of its introduction may not have taken notice of the marketing campaign, in June 2019 HMRC automatically and retrospectively granted a ‘reasonable excuse’ for the failure to notify in two specific cases:

This meant that no penalty applied in those cases.

For tax years 2016/17 onwards, HMRC said they had been writing directly to those individuals they believe are affected by the HICBC and therefore they are no longer accepting ignorance of the charge as a reasonable excuse. However, there have since been a number of cases at the First-tier Tribunal in which the taxpayer has successfully argued that their lack of knowledge was a reasonable excuse, depending on the facts and circumstances of the individual case and where HMRC have been unable to demonstrate that they issued a letter to the taxpayer regarding the charge (see, for example, Cockburn v HMRC).

Some taxpayers have also argued in the courts that the legal mechanism used by HMRC to assess the charge itself was invalid. The Upper Tribunal agreed with this in the case of Wilkes. However, HMRC have appealed this decision and we expect the case to be heard by the Court of Appeal at some point in 2022. In addition, in the Autumn 2021 Budget it was announced that retrospective changes would be made to the law in order to prevent further challenge by taxpayers on this particular technicality.

If you are in this situation, we suggest you seek professional advice.

You can find government information about the HICBC on GOV.UK.

You can also find a calculator on GOV.UK to estimate your (or your partner’s) liability to the HICBC.

We also publish separate information on issues relating to the HICBC on separation and if your income falls.

If you require further detail, you may find the information at revenuebenefits helpful.