⚠️ Universal Credit (UC) is gradually replacing tax credits, and some other social security benefits. Universal credit is now available across the UK and HMRC state that it is no longer possible for anyone to make a brand-new claim for tax credits. Instead, people are expected to claim UC (or pension credit if appropriate). Until they start to claim UC, existing tax credit claimants can continue to renew their tax credits and/or add extra elements to their claim. See our tax credit page for more information. Existing tax credit claimants (under state pension age or in a mixed age couple) are expected to be moved across to universal credit by the end of 2024. You can find out more about this in our universal credit section.

This page tells you when changes of circumstances can be backdated.

Please note, now that UC is available across the UK, HMRC state that it is no longer possible to make a brand new claim for tax credits and so the standard backdating and the longer backdating rules for new claims no longer apply in most cases. Some recent court cases may affect the rules and we explain more about this below. 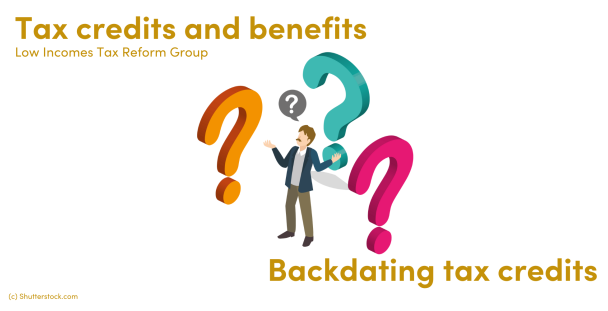 This page explains when it is possible for tax credits to be backdated.

Can I backdate the date of a change?

If you are entitled to extra elements as a result of a change of circumstances, HMRC will usually pay these elements from the date you report the change. However, you can be paid for an earlier period in certain circumstances. This is called backdating.

We explain what changes you must report on our changes page.

If your circumstances change while you are on tax credits, and you qualify for extra elements to be included, you should contact HMRC straight away so they can be added to your claim. If you met the rules for the new elements before you told HMRC about the change, they can backdate the change to your award up to 1 month, but you will need to ask for this.

In some cases involving disability elements longer backdating may be possible.

The disability-related elements of CTC and WTC are only included if you, or someone in your family, get certain disability benefits or payments.

If you now qualify for extra elements to be included because you (or someone in your family) start getting a qualifying benefit, you should contact HMRC straight away so they can be added to your claim. You should be able to have the extra elements added in from the date you claimed the disability benefit provided you tell HMRC within one month of the date of the decision on the qualifying disability benefit claim.

Sandra claims CTC for her daughter Amy. She applies for Disability Living Allowance for Amy on 10 May 2022. The DLA is not awarded until 12 October 2022. As long as Sandra tells HMRC that Amy has been awarded DLA within 1 month she will receive backdating of the disabled child element of CTC to 10 May 2022.

Sometimes the date the disability benefit is awarded from falls into a previous tax year. Where this happens, the backdating rules still apply providing you tell HMRC within one month of the date of the decision on the qualifying disability benefit claim.

Bruno works 30 hours a week and claims WTC. He applies for Personal Independence Payment on 4 November 2021. The PIP is awarded on 12 August 2022. As long as Bruno tells HMRC within one month of the date the PIP decision is made, HMRC will be able to add the disability element to his ongoing award and also review his award from 2021/22 to include the disability element from 4 November 2021.

What happens if I claimed UC before getting a disability benefit decision?

Rasheed is a single father with two children. He worked full time and claimed working tax credit and child tax credit. On 1 May 2021, he claimed Disability Living Allowance for his youngest child. In November 2021, Rasheed lost his job and claimed universal credit from 10 November 2021. His tax credits ended. In December 2021, his DLA claim for his youngest child was refused and Rasheed appealed the decision. In September 2022 Rasheed was awarded DLA for his child following a Tribunal. As long as Rasheed contacts HMRC within 1 month of the Tribunal decision, his tax credits award will be recalculated to include the child disability element(s) from 1 May 2021 (the start date of the DLA award) to 9 November 2021 (the day before he claimed universal credit).

What if my change of circumstances reduces my tax credit award?

If your change means you are entitled to a lower amount of tax credits, HMRC will backdate the change to when it happened, regardless of when you tell them. You must tell them about some changes that happen within a month, otherwise they might charge you a penalty for not telling them. See our section on changes of circumstances to find out more about what you need to notify and when.

When it was possible to make new tax credit claims, if you met the qualifying rules before your date of claim, HMRC would backdate your claim up to 31 days. In other words, they treated the date of your claim as made up to 31 days earlier than it was actually received. This happened automatically in some cases.

It was possible for new claims to be backdated longer than 31 days in two cases – the first where a qualifying disability benefit was needed to give entitlement to tax credits and the second where an asylum seeker was granted refugee status.

If you were granted refugee status, your claim for tax credits could be backdated to the date you claimed asylum, but only if you claimed tax credits within one month of the decision granting you refugee status. Any backdated tax credit payments you got were reduced by the amount of Government support you were given for living expenses during the time you were waiting for your asylum claim to be decided. If you had already had a backdated payment of a social security benefit reduced because of this, you should have been paid the full backdated amount of tax credits.

Since the introduction of Universal credit, HMRC have gradually reduced the number of people allowed to make a brand new claim for tax credits and the way the rules have been written broadly means that if you can claim universal credit, then you can’t make a brand new claim for tax credits (there are separate rules for people, both in a joint claim, who have reached their state pension age). The exceptions to this rule have been steadily removed and HMRC now state that it is no longer possible for anyone to make a brand new claim for tax credits. HMRC stated that this meant people granted refugee status could no longer access backdated tax credits and they would have to claim universal credit instead (which does not have similar backdating provisions for those granted refugee status). This was the case even if the application for asylum was made before HMRC stopped allowing people to make new tax credit claims.

HMRC’s position was challenged in the Courts and a recent decision by the Court of Appeal (DK (2022) EWCA) considered this issue. The court decided that the individual in the case, who was granted refugee status after HMRC said no new claims for tax credits were possible, could claim backdated child tax credit covering a period before they claimed universal credit. This was because on the date they claimed asylum it was not possible for them to claim universal credit. It is not known yet whether HMRC will appeal the decision to the Supreme Court.

If you have been granted refugee status and your claim for asylum was made at a time when it was not possible for you to make a claim for universal credit, you should seek specialist welfare rights advice as soon as possible (in order to comply with the 1 month time limit for making a tax credit claim following notification of refugee status).

This page gives an overview of backdating tax credit claims and changes. For more detailed information, visit the following page on our website for adviser.