How do I claim back tax I have overpaid through PAYE on wages or pensions?

This page looks at what to do if you have paid too much tax on your wages or pension. 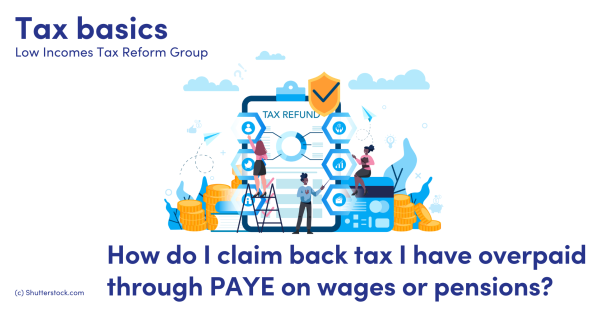 When might I have overpaid tax on my wages or pension?

If you receive employment income or pension income and pay tax through the Pay As You Earn (PAYE) system you may sometimes pay too much tax. There are various reasons for this.

When might I overpay income tax on employment income?

When might I overpay income tax on pension income?

You might have paid too much tax on your pension income if:

What is a P800 tax calculation?

Using this information, HMRC carry out an automatic reconciliation at the end of each tax year. This means that they put together all of the information they have received to work out whether or not you have paid the right amount of tax. If HMRC think you have not paid the right amount of tax, they send you a P800 tax calculation (in some cases they may send a Simple Assessment). This calculation will show you what tax HMRC think you should have paid. P800s are generally sent out between June and October after the end of the tax year in question.

You must always check your P800 tax calculation carefully, as HMRC may not have all the information they need to calculate your tax correctly, or they may have inaccurate information.

If you think you have paid too much tax, but you have not received a P800, see the question How do I claim a refund after the end of the tax year and for previous tax years?.

A cheque can take up to 60 days to issue. You should make sure HMRC have an up-to-date address before requesting a refund via cheque.

Before you accept any refund, make sure the repayment is correct, because:

Are you owed tax of less than £10 or do you need to make a claim for other tax relief from HMRC?

If you are due a repayment of less than £10, HMRC only repay it to you if you submit a claim – their systems do not automatically issue it. You might not get a calculation, because according to HMRC’s systems, you are not due one.

But you might be entitled to some extra allowances or reliefs, that HMRC have not given you, for example, for employment expenses. In that case, you should write to HMRC to tell them that you think you are entitled to them.

For example letters to help you do this, see Where can I find more information and examples?.

If HMRC thought you were due tax back for the years 2017/18, 2018/19, and 2019/20 they have probably already sent it to you. But if not, it might be worth checking whether you are due anything back, particularly if you have discovered you have not claimed enough allowances or other tax reliefs in 2020/21 and the same applied to earlier years.

Repayment claims have time limits, so do not delay. But do be careful – if it turns out that you have not paid enough tax in previous years, HMRC might be obliged to collect it if you prompt them to review your situation. You should therefore get your facts straight first.

Note that P800 calculations are cumulative. This means if you receive more than one, the previous years’ balances are taken into account and automatically included in the next year’s calculations.

For the actual amount you should look at the calculations on the P800 from the final year of your tax claim, as this will include everything from the previous years.

Jenny submitted a tax refund claim for uniform expenses over the past four years, and is owed £12 in total for each year – a total of £48.

Her P800 calculations for each of the four years she is claiming for would be:

How do I claim a refund for the current tax year, if I don’t want to wait for a P800?

If you think you are overpaying tax through PAYE in the current tax year, then it is likely there is a problem with your tax code. If you are still working or receiving a pension, you should tell HMRC why you think you have paid too much before the end of the tax year.

You can do this online, using your Personal Tax Account.

If you prefer to telephone HMRC, the helpline for individuals and employees can be found on GOV.UK.

Before you telephone HMRC, you will need to gather together:

Make sure you keep a note, in a safe place for future reference, of:

HMRC may already have everything they need to check your position but you may need to send in more information – if so, HMRC will let you know what paperwork you should supply.

Once HMRC process your information it might be necessary to issue you with a new tax code, meaning any refund will be added to your wages or pension and the amount will generally be paid automatically through the payroll. This will result in a lower tax deduction or a tax refund through PAYE.

If the repayment is due towards the end of the tax year and you have already received your final pay or pension for that year, you may have to claim a refund directly from HMRC once the tax year has ended or wait for the P800 process to happen.

If you were working, but have now finished working and won’t have a continuing source of income, for example because you have become unemployed, are returning to studying or are leaving the country, see our employment section to find out how to claim your tax refund. The form to use to claim a repayment depends on your circumstances.

For guidance on your refund position if you stop work because you are made redundant, see the employment section.

If you are retiring, whether or not you are due a refund in respect of your paid work will largely depend on if/how you choose to take any pension/pensions you may have. As there are so many options, it will be hard to know what your overall refund position will be at the point you stop work, as this will depend on what happens next.

It may therefore be best to wait until the end of the tax year in order that a full reconciliation of your tax position can be performed – see our pensioners section for more information on taking your pension flexibly.

How do I get my emergency tax back?

There is information on what to do if you have had an emergency tax code during the tax year in the employment section.

How do I claim a refund after the end of the tax year and for previous tax years?

If you have paid too much tax through your employment or pension and the end of the tax year in which you overpaid tax has already passed (and you have not received a P800 or need your refund urgently and can't wait for your P800), you can make a claim for a refund. It is probably easiest to do this by writing to HMRC.

If you write to HMRC, mark the top of your letter clearly with ‘repayment claim’ so that HMRC can make sure it gets to the right department.

To write to HMRC, use the address on GOV.UK.

See Where can I find more information and examples? below for an idea of how to write your letter and what you might include. Generally, your letter should:

Keep a copy of your letter and any enclosures and ask the Post Office for a proof of posting in case of later query.

In most cases you can get back the tax you have overpaid, as long as you claim on time. Note, in some cases, you may be asked to complete a form R38 or you may want to enclose this with your letter if you would like your refund mandated to someone else.

Remember, even if you only want HMRC to look at one particular tax year, HMRC may take the opportunity to look over the four ‘open’ tax years. Therefore, you should review your position for all four tax years before contacting HMRC.

What are the time limits for claiming back overpaid tax?

The time limits for claiming back overpaid tax are set out in the introduction page.

Where can I find more information and examples?

We have produced some example letters you can use to write to HMRC regarding a tax repayment. These are available in the following formats:

There is more information on GOV.UK on how to:

How is my tax collected?

How do I check my coding notice?

What if I pay too much tax?