At the start of each new tax year (from 6 April) there are changes to minimum wage rates, tax rates and other rates. If you are employed, these changes might affect your ‘take home pay’ or ‘net pay’ – that is the money that ends up in your bank account when you are paid by your employer. 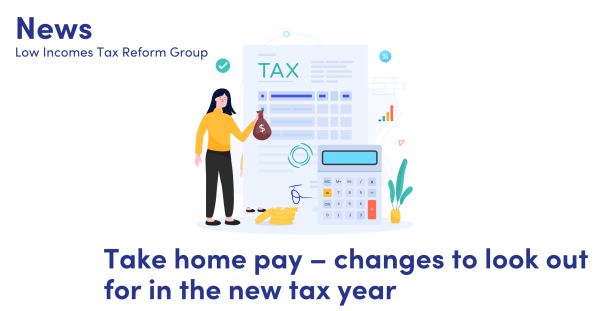 There are three key changes to be aware of:

The NMW rate will be £4.81 for apprentices (up from £4.30 per hour). Apprentices qualify for the lower apprentice rate if they are under 19, or still in the first year of their apprenticeship contract.

The new pay rate will only affect your pay from the first full pay period beginning on or after 1 April 2022. For example, if you are paid weekly on a Monday to Sunday basis, the first full pay period on or after 1 April 2022 will be the week beginning Monday 4 April 2022. This means that if you work on Friday 1 April, Saturday 2 April or Sunday 3 April, your pay will be based on the old rates. But from Monday 4 April, you should have more money in your pay packet!

2. From 6 April 2022, the rate of employee National Insurance contributions (NICs) increase by 1.25% with the introduction of the ‘Health and Social Care Levy’. As a result, most employees (unless they are high earners) will pay 13.25% (up from 12%) on their earnings in excess of the ‘primary threshold’. From 6 April 2022 until 5 July 2022, the primary threshold will be £190 per week, or £823 per month. You will only pay NICs on wages in excess of the relevant threshold in each pay period but after this point, you will pay 1.25p more in the pound in NIC compared to the previous tax year.

3. Ordinarily, any changes in tax rates, thresholds and allowances would apply from the beginning of the tax year. However, in an unusual turn of events, it was announced in the Chancellor’s Spring Statement that the NIC primary threshold would be increased part way through the tax year. On 6 July 2022, the primary threshold for NIC purposes will increase to £242 per week, or £1,048 per month. This will mean that the point at which employees start paying NIC will become the same as for income tax. For lower earners this may partially or even fully offset the 1.25% increase and for some, could even mean that they pay less NIC than they did previously.

What is staying the same?

On the flip side to the above changes, there are also some freezes – in particular, the main rates and allowances for income tax (other than for Scottish taxpayers) are remaining the same for the duration of the new tax year (2022/23). The personal allowance for income tax will continue to be £12,570, with no inflationary increase, which works out as £242 per week, or £1,048 per month. This means that if you receive a pay increase, this could result in you paying more tax in real terms.

Also remaining the same is the threshold at which you start having pension contributions deducted from your pay under auto-enrolment (£120 a week or £520 a month). The contribution rate also remains at 8% overall (usually made up of 3% from your employer and 5% from you, or 4% with tax relief factored in). Previously the threshold was aligned with the Lower Earnings Limit for NIC, which is £123 per week in 2022/23 (£120 per week in 2021/22). Freezing the auto-enrolment threshold at £120 per week means that you will pay slightly increased pension contributions.

What do these changes and freezes actually mean for take home pay?

We have produced some example payslips that show the overall effect for a person receiving the ‘age 23 and over’ NLW rate and normally working 35 hours a week. We have assumed that the employee is contributing to a workplace pension under auto-enrolment, in line with the usual percentages.

We have created three payslips;

As you will see, an employee in receipt of the NLW can expect an overall increase in their take home pay of around £20 a week when comparing to the position in March 2022 with that in July 2022.

For those employees that are earning more that the NLW/NMW, a pay rise is a matter of negotiation between you and your employer. If you are not receiving any other sort of pay rise in April 2022, then the take home pay position may not initially look quite so favourable, particularly with the increased rate of NICs payable in from 6 April 2022. However, the changes to NIC primary threshold from 6 July 2022 will ultimately lead to a reduction in NICs being payable if you are not a particularly higher earner.

For example, an employee earning an annual salary of £20,000 paid weekly will see the amount of NIC they pay each week change as follows:

What about benefits entitlements?

The rates for most benefits and tax credits will increase for the new tax year.

Changes in your pay can sometimes affect benefit and tax credits entitlement. You should check with the department or local authority paying you to find out how you will be affected.

In particular, if you are in receipt of Universal Credit (UC), then your award is usually based on your take home pay (net income) – your pay after deduction of tax, NIC and certain pension contributions – so if your overall net income goes up then you might receive a lower award under UC. Although any reduction might be offset by the increased rate in force from 6 April 2022.

For example, someone with a £20 increase in their take home pay each week, means their net earnings for UC purposes in each monthly assessment period could be increased by £100 (if there are five pay packets in the month). They may see a reduction in their UC where the increase causes them to exceed the work allowance (the amount of earnings that claimants with children or with limited capability for work can keep in full before UC is tapered away). For those above the work allowance, universal credit's ‘taper rate’ of 55p in the pound means that a £100 increase in take home pay, could result in a £55 reduction in their universal credit award depending on their level of award and circumstances. This person would still be better off by £45 overall.

If you are an employee, it is usually the case that, between your employer and HMRC, you should receive the correct level of wages and pay the correct amount of tax/NIC and pension contributions in any tax year. However, it is always a good idea to check your payslips to ensure there are no unexpected changes or errors.