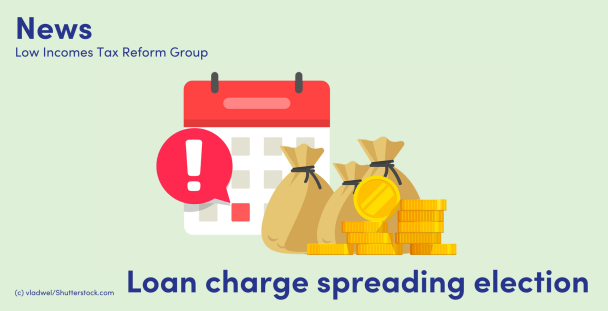 HMRC originally estimated 21,000 people facing the loan charge could benefit from the ability to make a spreading election. Their recent report suggests that less than 2,000 people have taken up the offer.

In many ways, the ability to make a spreading election was one of the most useful recommendations to come out of the Sir Amyas Morse review for many low-income workers, and we don’t want people that would otherwise benefit from it, to miss out! However, it isn’t beneficial for everyone to make a spreading election, so it is important you only do so once you have fully considered your own position.

What is the spreading election?

In his report on the loan charge, Sir Amyas Morse recommended that: “Taxpayers should be entitled to opt to spread their outstanding loan balances over three years, to mitigate the impact of taxpayers paying tax at a higher rate than they ordinarily would. This reduces the effect of stacking their outstanding loan balances into a single year, which artificially created an increased exposure to a higher rate of income tax.”

In some cases, this should make it more affordable, as it reduces the effect of stacking the income into one tax year (and you may save even more money if your income has dropped significantly in 2020/21 due to CV19 as you may have some spare capacity in your personal allowance or lower rate bands).

Even if there is no change to the amount that you will pay overall, there may be a cash flow advantage by making a spreading election as the 2019/20 tax payment will be due by 31 January 2021 and the 2020/21 tax will be due by 31 January 2022. (Depending on the amount of tax involved it could be that you also have to make payments on account earlier than the January 2022 due date, but even so, there should still be a cash flow advantage.)

Making a spreading election may not be beneficial in all cases and you should try and ensure you understand the consequences of making this irrevocable election before you do so. We look at some of the considerations in our article: Loan charge: where are we now?. There are two points on which we wish to expand on, as we think these could be putting people off making an election where it is beneficial to do so:

HMRC refer to the additional tax as “Residual Tax”:

We will not collect an individual’s residual tax where all the following criteria are met:

Where these conditions are not met, residual tax will need to be paid to settle open enquiries and assessments for the years in which the loans were made.

Note, that HMRC have confirmed to us that 'the loan charge has been paid' can encompass those who pay the loan charge later, for example under a payment plan. It is unclear, as yet, what this concession means for other amounts that are usually contained in settlement agreements – for example penalties and IHT. We have asked HMRC to confirm.

How can I make a spreading election?

You must make the spreading election via the on-line loan charge reporting form (you will need a Government Gateway username and password to do this – if you don’t have any, you can create sign in details there and then).

A paper version of the form for those that cannot access the online version is available by phoning HMRC on 03000 599 110 or is available to download from our website here.

We know the fact that the spreading election is contained on the loan charge reporting form may be stopping some people from making it, particularly if you were in a loan scheme without your full knowledge or understanding and so do not think you will be able to complete the rest of the form. We look at the situation further in our news item: Worked through an umbrella company in the past? You should check whether you need to do anything about the loan charge.

We have tested the form and we can confirm that you will need to provide:

In the context of lower paid agency workers, the ‘employer’ will probably be the umbrella company you worked through at the time you were receiving loans, rather than the agency that found you the work or the end client that you worked for.

The form is likely to be quick and straightforward to complete if you have details of your loans.

If you do not have details of your loans, then you should provide as much as you can. Note that the online form does allow you to type ‘Unknown’ and some of the questions have a ‘Do not know’ option.

Josie’s additional information from will look something like this:

Filling in form for self

Dates when you received loans

Tax or National Insurance paid or agreed to pay

What should I do once I’ve made the election?

Once you have made the spreading election, you will need to complete your 2018/19 tax return, assuming you have not done this already.

The inclusion of the loan charge income in your 2018/19 tax return (either 100% or 1/3rd depending on whether you make a spreading election), will probably generate a tax liability for you.

If you cannot pay the resulting tax liability in one go and need time to pay, you can arrange a Time to Pay arrangement with HMRC.

This may be on a ‘no questions asked’ basis for up to 5 or 7 years or you may need to submit a detailed income and expenditure form and get a ‘bespoke’ arrangement. Further information can be found on GOV.UK.

If you need help with filing your 2018/19 tax return and you are on a low income, you can ask TaxAid for help.

For many who missed the extended 30 September 2020 filing and payment deadline, late filing and payment penalties will be charged as if the 31 January 2020 original deadline was not met (that is, from 1 February 2020), meaning their tax return and payment are already over ten months late.

One reason for considering making a spreading election, if you have not done so before, is that doing this could help limit the amount of interest and penalties due for the late filing of the 2018/19 tax return, as some are based on how much the tax liability is for the year in question.

We look at the situation with late filing and payment penalties in more detail here.

Further to our recent press release, we very much hope that HMRC are going to be reasonable and use their common sense to waive penalties and help people get over the line, but to the extent that penalties are levied, TaxAid may be able to help you appeal them.

What happens if I miss the 31 December deadline?

HMRC say any late election made up to 31 December 2020 will be automatically accepted by them.

From 1 January 2021, HMRC will consider late elections on a case-by-case basis, in exceptional circumstances that were beyond the individual’s control. They explain what they mean by that in their guidance.

If you want to make the election, please don't take a chance by leaving things until 2021 – please take action now.