Help for those with unfinished loan charge business

The loan charge situation continues to rumble on, with many people still trying to deal with difficult, ongoing issues. Here we offer some information and support to four different groups of people we have identified, who may have outstanding loan charge issues to resolve. 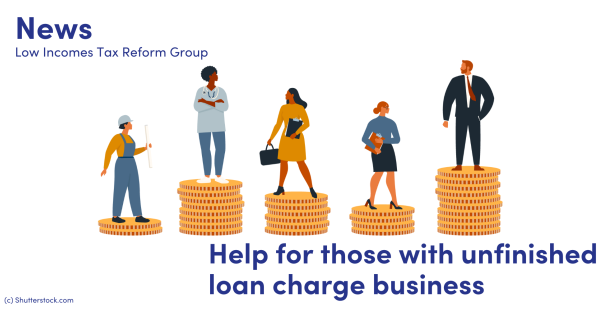 The loan charge affects people who were paid via loan schemes and who did not either repay their loans or ‘settle’ their outstanding tax affairs with HMRC by the deadlines set.

Here we offer some information to four other groups of people we have identified may be struggling to draw a line under the loan charge. Follow the links below for the current position for each of the groups we have identified:

Originally the loan charge had a lengthy look-back period (applying to loans made from 6 April 1999 to 5 April 2019). However, following the Morse review, the loan charge no longer applies to certain older loans.

In particular, you may be due a refund or waiver of any amounts settled ‘voluntarily’ to avoid the loan charge before the changes from the Morse review stopped the loan charge applying to loans made prior to 9 December 2010.  Refunds or waivers must be applied for under the Disguised Remuneration Repayment Scheme 2020.

In two articles written for Accounting Web, which can be accessed here and here, we give a high-level overview of how the Disguised Remuneration Repayment Scheme 2020 works. We also highlight a potential ‘double tax’ issue for those who did not settle before 11 March 2020, if they organise the write-off of their loans in the future.

By its nature, the refund/waiver process is quite complex and involved, so applications for a refund or waiver can take some time. HMRC has told us that by 9 August 2021, they have completed approximately 590 applications, of which 440 had received either a repayment, a waiver or both by this date. HMRC confirmed in a recent appearance before the House of Lords Economic Affairs Committee that they hoped to deal with all remaining ‘live’ applications by the end of the year.

If you haven’t made an application yet, you need to get into the process and to do that, you need to complete and return the application form by 30 September 2021. HMRC says that if they receive a form after this date, they won’t be able to refund or waive any of the amounts of voluntary restitution.

It is important to note that the refund or waiver scheme applies only in relation to loans made in unprotected years prior to 9 December 2010 (for which HMRC had not taken action to protect its assessing position, for example by opening an enquiry or issuing an assessment). In a nutshell, if there are open enquires or assessments, the requirement to pay tax on loans entered into before 9 December 2010 does not fall away altogether even though the loan charge doesn’t apply. Thus, if there are open enquires or assessments, there can be no refund/waiver under the scheme.

Following the Morse review, the loan charge also no longer applies to loans made between 9 December 2010 and 5 April 2016, where the scheme user made reasonable disclosure of their scheme, but HMRC failed to take action, for example by opening an enquiry.

People who think they made a reasonable disclosure of their scheme may therefore exclude an amount from the amount of loan charge income included on their 2018/19 tax return or, to the extent they paid voluntary restitution of the amount in a settlement agreement made before the changes from the Morse review, may now seek a refund or a waiver.

With regards to what constitutes ‘reasonable disclosure’, HMRC’s guidance is on GOV.UK here and here.

Concerns have been expressed to the government, for example by the House of Lords Finance Bill sub-committee, that HMRC are defining ‘reasonable disclosure’ too strictly and not in accordance with the intention of the Morse review.

If you have made an application for a refund/waiver (under the Disguised Remuneration Repayment Scheme 2020), which has been refused, and you feel that HMRC have made an unfair decision, then you can ask for a review of the decision as set out here (see para 7.17 onwards). Although there is no formal right of appeal to the review decision, there may be other options, for example a complaint or judicial review, although this can be costly. You might also want to highlight your case to your MP.

If you have excluded an amount from the loan charge income included on your 2018/19 tax return, and HMRC have issued an enquiry into your tax return, please see our guidance below.

The 30 September 2020 was the deadline by which those affected by the loan charge had to report the loan charge on their 2018/19 tax return and pay the tax due (or arrange a payment plan) without incurring late filing or payment penalties or being charged interest.

We know that there are a lot of people who have not yet filed their 2018/19 tax return containing the loan charge. This may be for many different reasons, including that:

In terms of the first bullet point, although you may not have known you were in a loan scheme, if HMRC have been sending you ‘notices to file’ a 2018/19 tax return and/or penalties for the late filing of that tax return and you do not know why, then this may be because they have data that suggests you received loan income and need to deal with the loan charge. As set out in an earlier article, you should seek to clarify the position as soon as possible and then seek help with the other steps required, as appropriate, as set out below.

In terms of all the other bullet points, a professional tax adviser will be able to help you here. You can find one by using the Chartered Institute of Taxation’s Find a CTA tool or if you are on a low income, by getting in touch with the tax charity TaxAid.

Tax Aid can provide free advice and assistance with loan charge issues to individuals on incomes of around £20,000 a year or less. This can include:

⚠️ Important note – if you do not submit a 2018/19 tax return soon, HMRC may well send you a ‘determination’ of the tax they think you owe. Even though this will be an estimated amount, it is legally enforceable until you submit the outstanding return. If you miss the time limit for submitting your return after receiving the determination, then the determination stands unless HMRC agree a claim you might make for ‘special relief’ – this is explained on the TaxAid website.

Those who have filed their 2018/19 tax return, but are now under enquiry

As set out in our earlier article, HMRC are opening enquiries into taxpayers who filed a 2018/19 tax return, but who did not return the loan charge in that tax return or who included a different amount for the loan charge, in comparison to HMRC’s figures, for example because they have excluded an amount that they believe they made a reasonable disclosure of.

It is possible that HMRC will have issued some enquiries in cases where people have done everything correctly and declared the right amount of loan charge, just to double check that is the case, rather than because they think there is a risk of an inaccuracy. If you think that this might apply to you (because you filed a tax return, are sure it is correct and just can’t see how HMRC could have any data beyond what you have already returned), you should phone them as soon as possible on 0300 322 9494 (Monday to Friday 8.30am to 5pm, excluding bank holidays) to discuss and ask them to close the enquiry. HMRC have reassured us they should be able to do this quickly and easily where is it clear there is nothing wrong with the tax position.

By way of background, when an enquiry is opened, the taxpayer and HMRC will discuss the figures and, to conclude an enquiry, HMRC can issue a formal closure notice and if appropriate, assessments, penalty determinations and amended figures for the tax return. Often (depending on the facts for each enquiry), HMRC will propose to enter into a ‘contract settlement’ setting out the tax, interest, and penalties (if appropriate) to which you are liable, rather than issue a formal closure notice etc.

A contract settlement can be used by HMRC as an administrative convenience, particularly if HMRC’s enquiries cover a number of tax years where, for example both they and the taxpayer are in agreement over the amounts of tax, interest and penalties that need to be paid. By entering into the process and signing a ‘letter of offer’, you will be admitting the tax liabilities and any interest and penalties, in return for a monetary sum and HMRC agreeing not to enforce its formal powers. It does not require any returns to be amended and allows you to negotiate payment terms and so on, if you need to.

For people caught by the loan charge, who now have an enquiry into the 2018/19 tax return, where there is also an underlying tax dispute (i.e., an earlier enquiry or assessment), HMRC have confirmed that they are writing out to people in this situation, offering to try and deal with both parts (the 2018/19 loan charge reporting irregularity and settlement of the earlier enquiry or assessment) simultaneously. This might be via a contract settlement, instead of (or as well as) via a closure notice, as a closure notice would deal with the 2018/19 position but potentially leave the earlier issues to be dealt with.

Although the letters that we have seen, do not make specific reference to the ‘residual tax concession’ that was announced (whereby people who have paid the appropriate amount of loan charge may not need to pay any balance of ‘residual tax’ flowing from the earlier enquiry or assessment, where this is higher), we have had reassurance from HMRC that this concession will be applied as appropriate as part of the contract settlement negotiations.

(For any taxpayers, who have paid the loan charge and believe the residual tax concession applies, but have not been contacted by HMRC, please write to HMRC at cl.cap@hmrc.gov.uk so that HMRC can settle you and close down your file as quickly as possible.)

Where there is no underlying tax dispute, and if you are unable to provide any further information about your tax affairs to conclude the 2018/19 tax return enquiry, HMRC may simply issue a formal closure notice telling you that they are going to amend the tax return based on their own information (they may also do this if you do not enter into contract settlement negotiations). A taxpayer then has 30 days to appeal any amendments made to the tax return. This will give you the opportunity to refer your case to an independent tribunal for consideration. If this does not happen, the position per the closure notice becomes final, any additional tax it produces must be paid and the clock is set running in terms of late payment interest/penalties etc.

There is some general information on dealing with an enquiry in our previous article.